Iskar-Panega Eco-trail - a paradise an hour away from Sofia 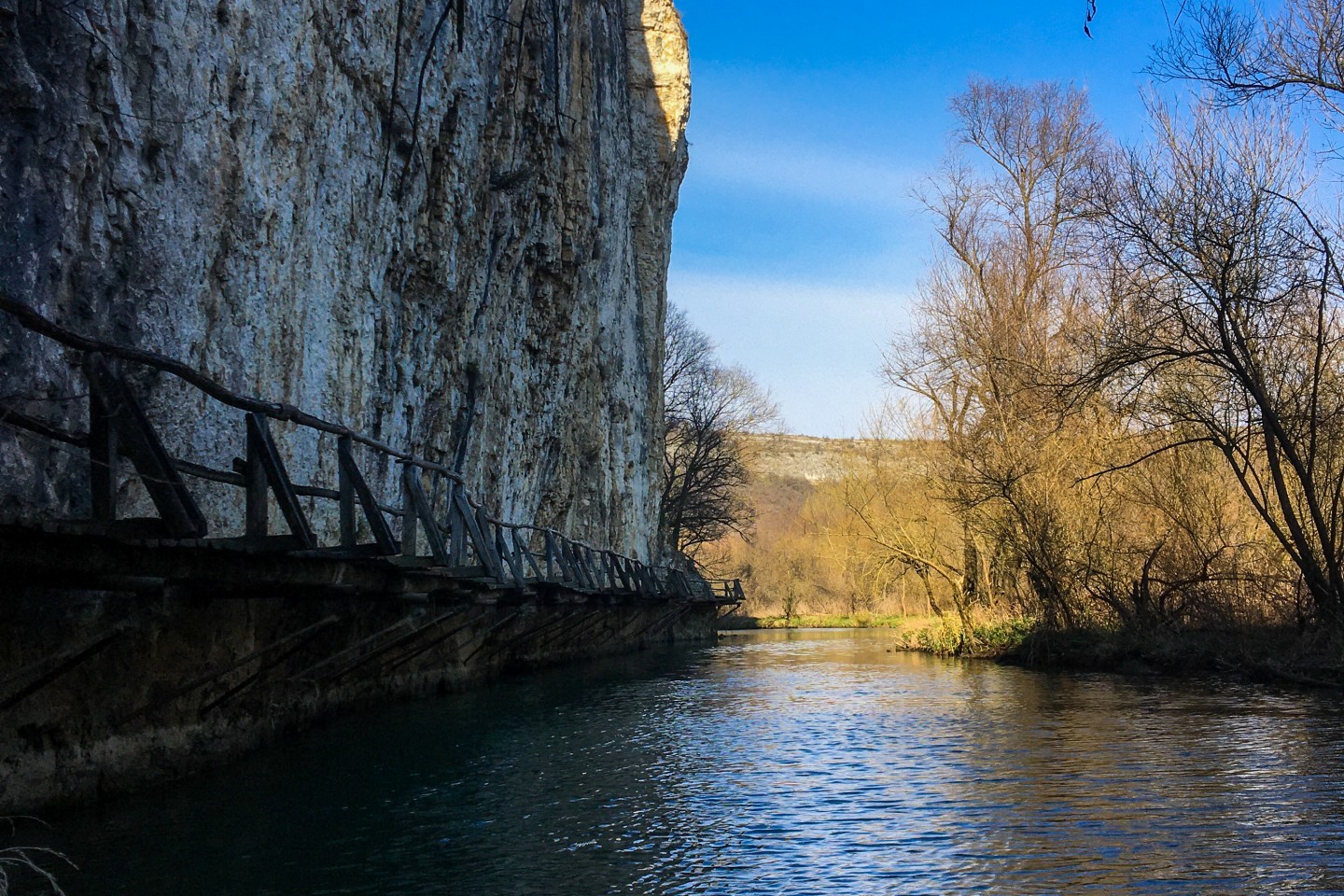 Iskar-Panega Eco-trail - a paradise an hour away from Sofia

The Iskar-Panega eco-trail is located in the area of ​​the town of Lukovit. It is located on the banks of the river Zlatna Panega and passes from one side of the river to the other. The trail is short and easy, but it will definitely amaze you with the beauty of the surrounding nature and the tranquility of this place. Beautiful wooden bridges take you over the river while you enjoy its beautiful colors and the fabulous nature around. And if you feel an adventurous mood, you can explore the cave "Temnata dupka" (The dark hole) just near the trail.
* The trail is not circular, which means you have to return on the same route to the starting point.

How to get to the eco-trail?

Prepare for about an hour or two. The trail is 1600 meters long and you go back the same way (3200 meters in total). Definitely plan time for photos and a picnic.

The path is quite flat and pleasant. Only in the beginning there is a steep section that you can avoid. As soon as you leave the parking lot, you can pass under an artificial bridge with a sign "For the young and the brave", which passes over steep bridges and descends to the river. On the right there is a path, playfully called "For grandmothers and grandchildren", which reaches the same place on a much sloping terrain. The two paths meet a hundred meters below a gazebo.

Can i take my dog with me?

Yes, you definitely can. However, you should know that the steps of the bridges are quite steep and you may need to help / carry your pet. There are also signs requiring dogs to be on a leash. 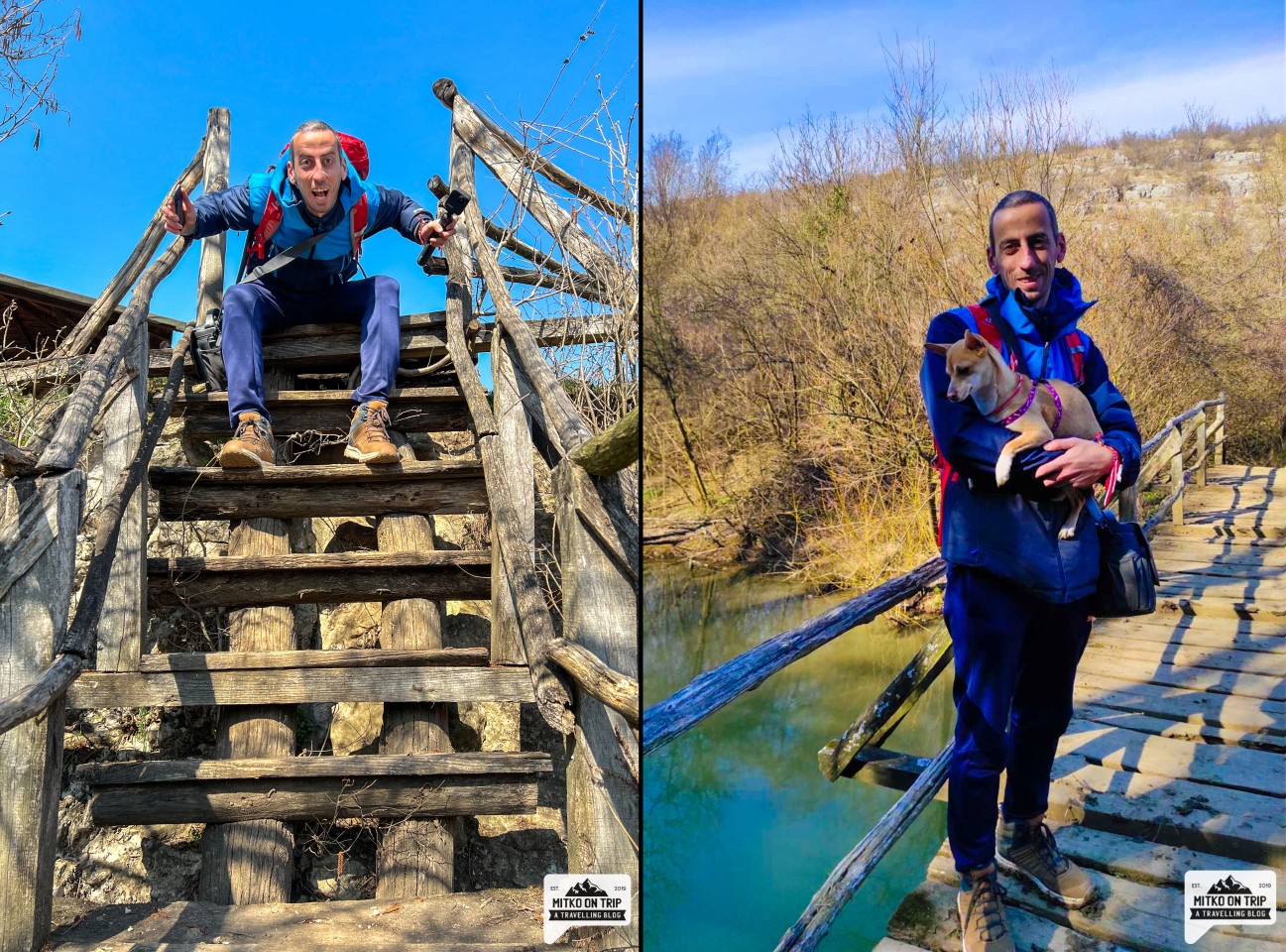 Does the place have a curious history?

I knew you would ask! Absolutely yes! Legend has it that the waters of the Zlatna Panega river spring from the Rila Lakes. A shepherd, who was grazing his flock in Rila, threw his stick towards the sheeps, but it fell into the lake and sank. The shepherd had hidden gold coins in it, so he searched for the stick, but did not find it. Years later, he came to the Lukovit area to buy sheep and saw his stick in a mill on the river. He asked the miller where he had found the stick. He replied that the river had brought it. The shepherd broke the stick and the hidden coins fell out of it. "This Panega is golden," exclaimed the shepherd.
Since then, it has been believed that whoever tosses a coin into Panega river will return to him in gold. 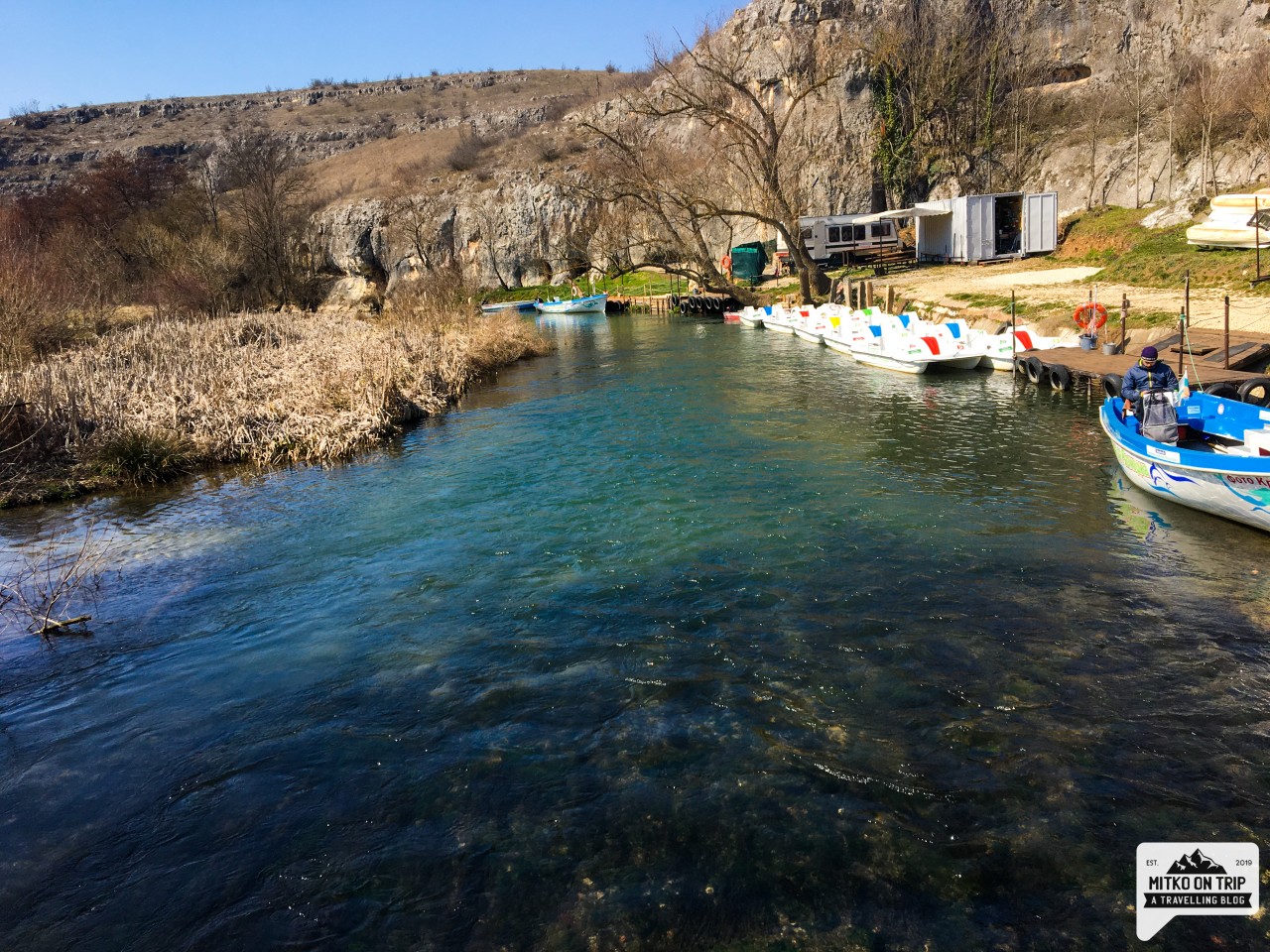 Is it possible to travel by water?

The eco-trail can be taken on the river by boat, water bike or kayak. You can rent on site or use your own equipment. Along the river you can sail the entire eco-trail of 3600 meters and reach the end, which is accessible only by water.
(On foot you can only reach point 5 of the route, and on the water you can go all the way) 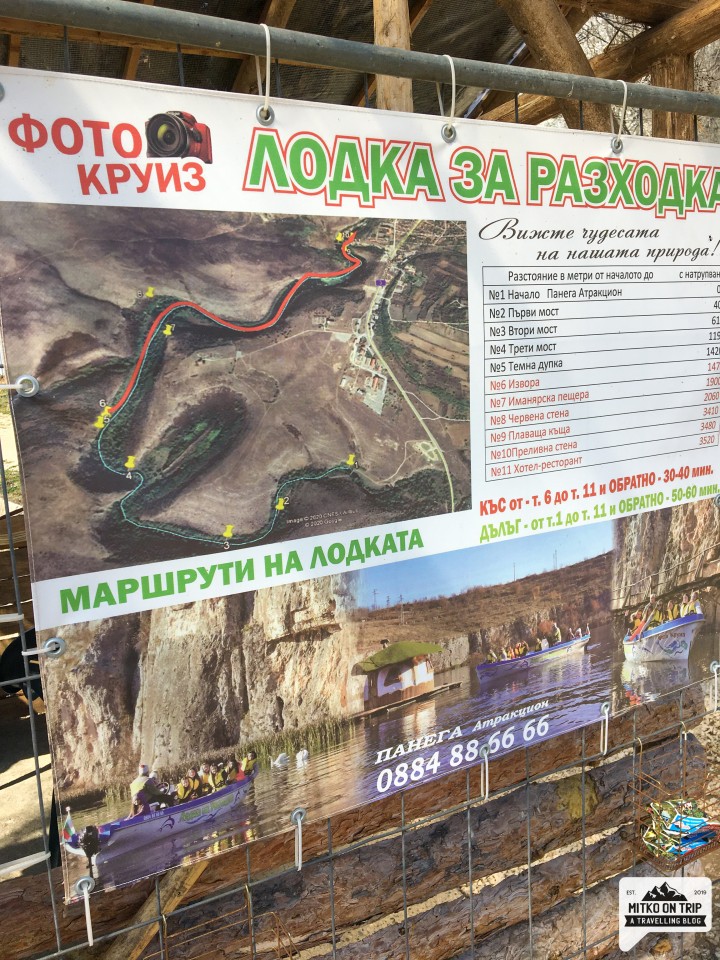 Near the eco-trail is the cave "Prohodna" (better known as God's eyes). You can reach it by car or on a walking route from the eco-trail 10 km long (in one direction). 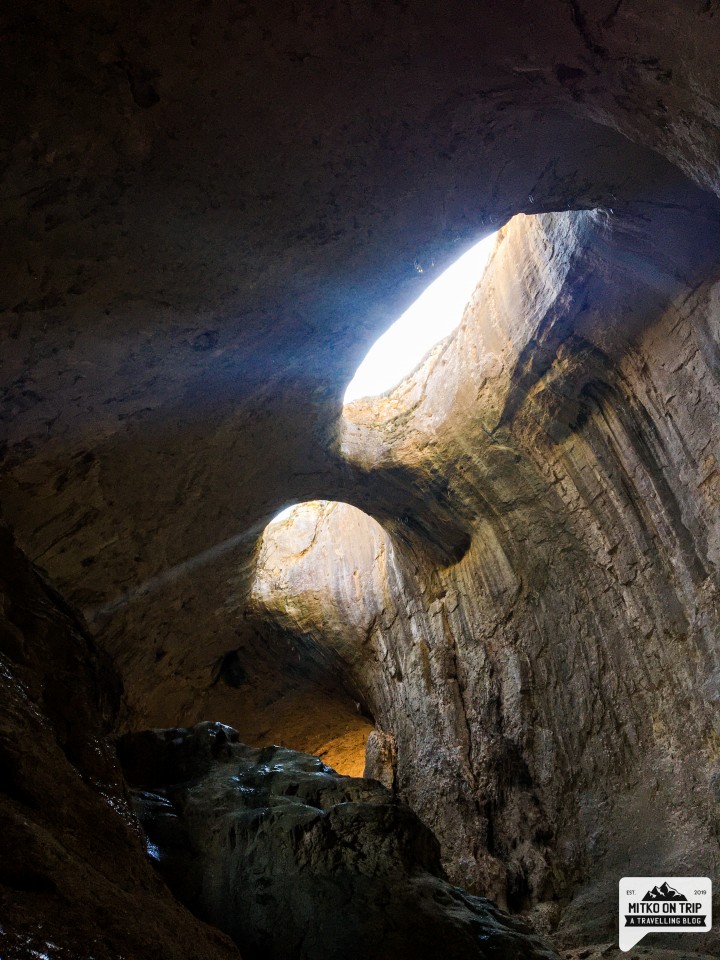 Some time ago I learned about the Iskar-Panega eco-trail, because I had seen a lot of people in the facebook groups upload photos from the notorious bridges. I had written it down in the list of sites I wanted to visit and it started waiting for its turn. But this time the reason to visit her was my friend Simo (Simeon Stoynev). He lives in Varna and came for a week to visit friends in Sofia. He asked me: "Mitko, do you want to go somewhere on an adventure?", And there is only one possible answer to this question. I started thinking about options, and he told me the Iskar-Panega eco-trail - I want to go there. 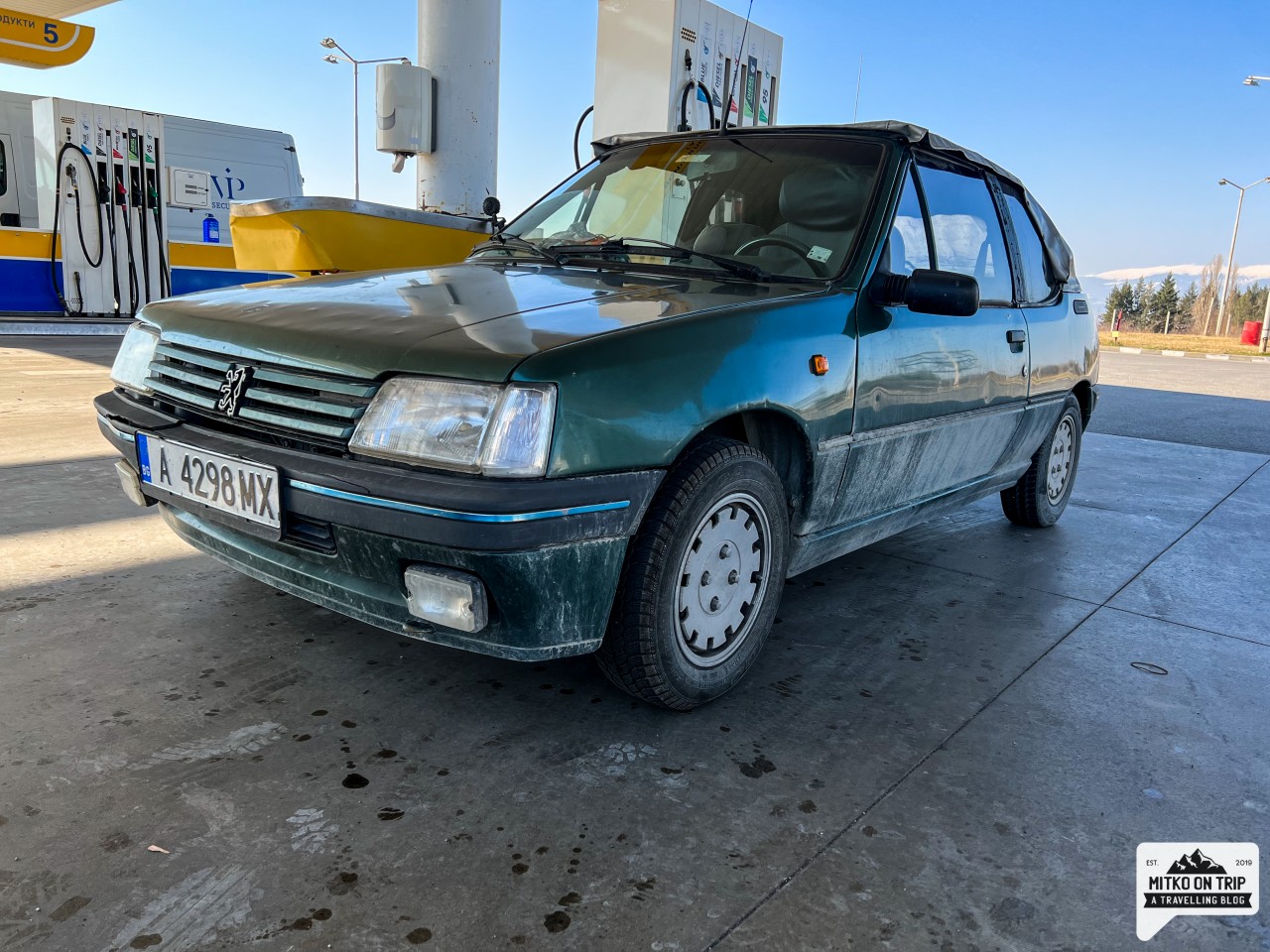 Sunday. 8 in the morning. Four friends, a dog and an adventure car. The GPS is on and we're off. 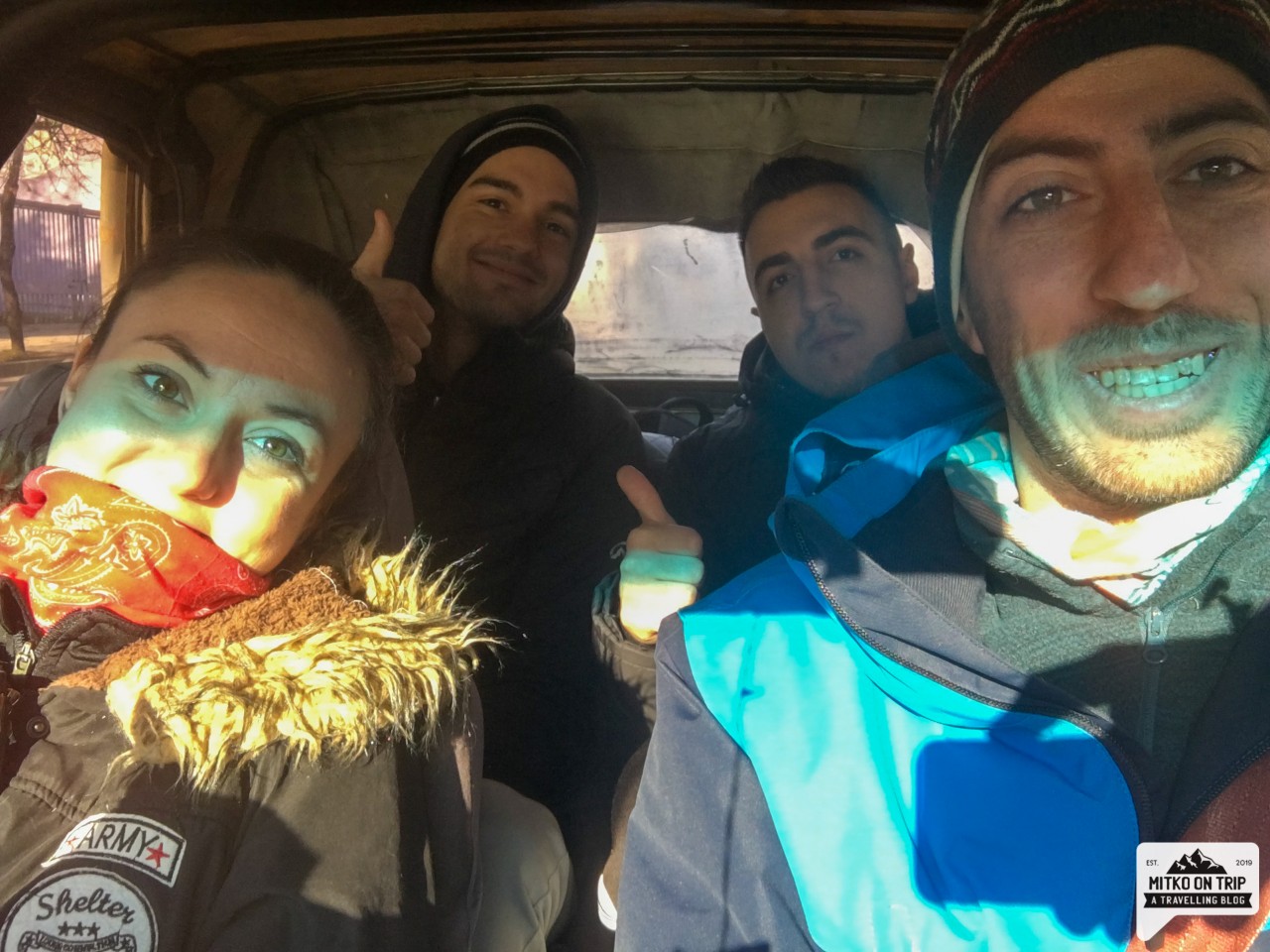 Although we are at the end of March, the temperature outside was barely above zero. The adventure car turned out to be quite cool in the winter, but here we are to the town of Lukovit. We turn around the city and reach a dead end street - something like a depot for old cars. The GPS continues, but there is no way. It turned out that we have entered wrong destination and now we entered the correct one - "Lukovit Trail Iskar-Panega". We go back and manage to find the parking lot. Outside the sun is already shining and we manage to warm up a bit. We take the path and reach the gazebo (where the starting routes converge). There is a bridge to the left of it and although we have read the inscription (Eco-trail on the right) we decide to stop for a few photos and enjoy the beautiful river. Its color is somehow different with shades of blue. (I later found out that it was due to the high concentration of carbonates in the water). 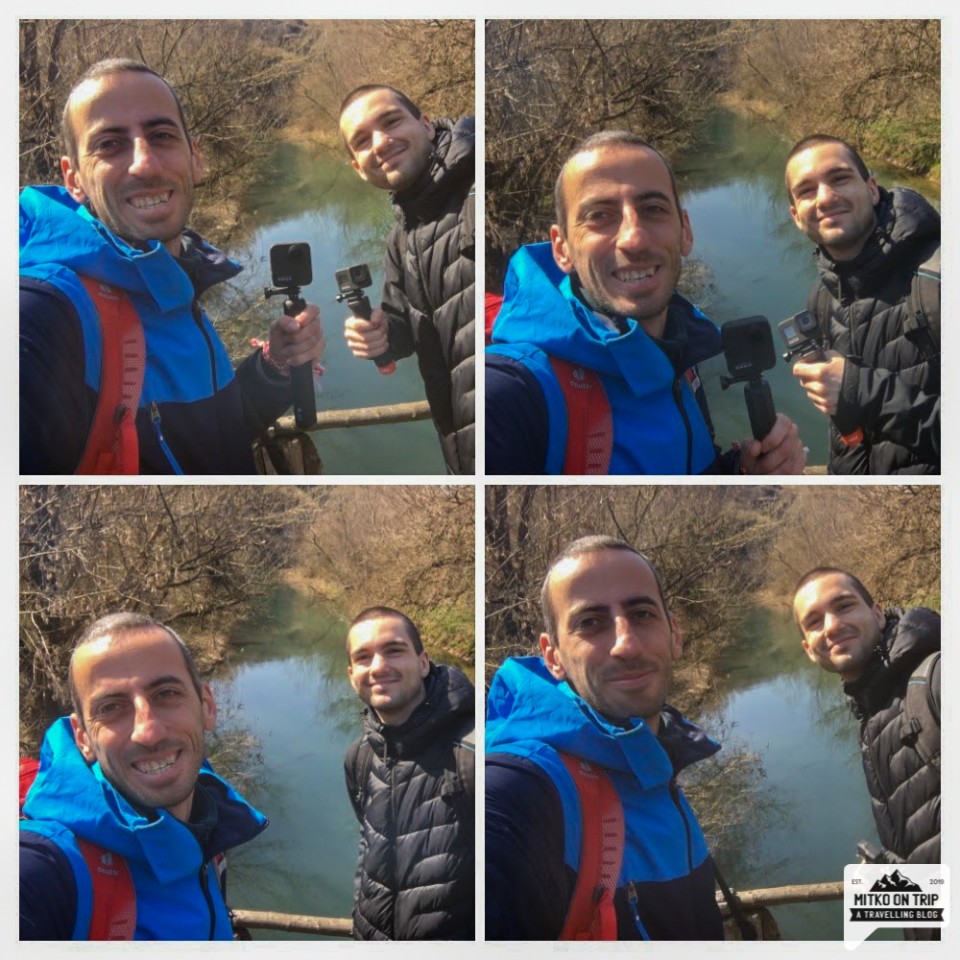 After a short detour we continue forward and reach a very lively place with several souvenir shops, food and drinks, a gazebo and a parking lot for water transport. We stopped to take photos of the river because it was soothing and then read the shepherd legend. Some of us threw a coin. (I'll tell you about the gold ..) Further the path became quite muddy, but it did not take away from the beauty of nature around us. 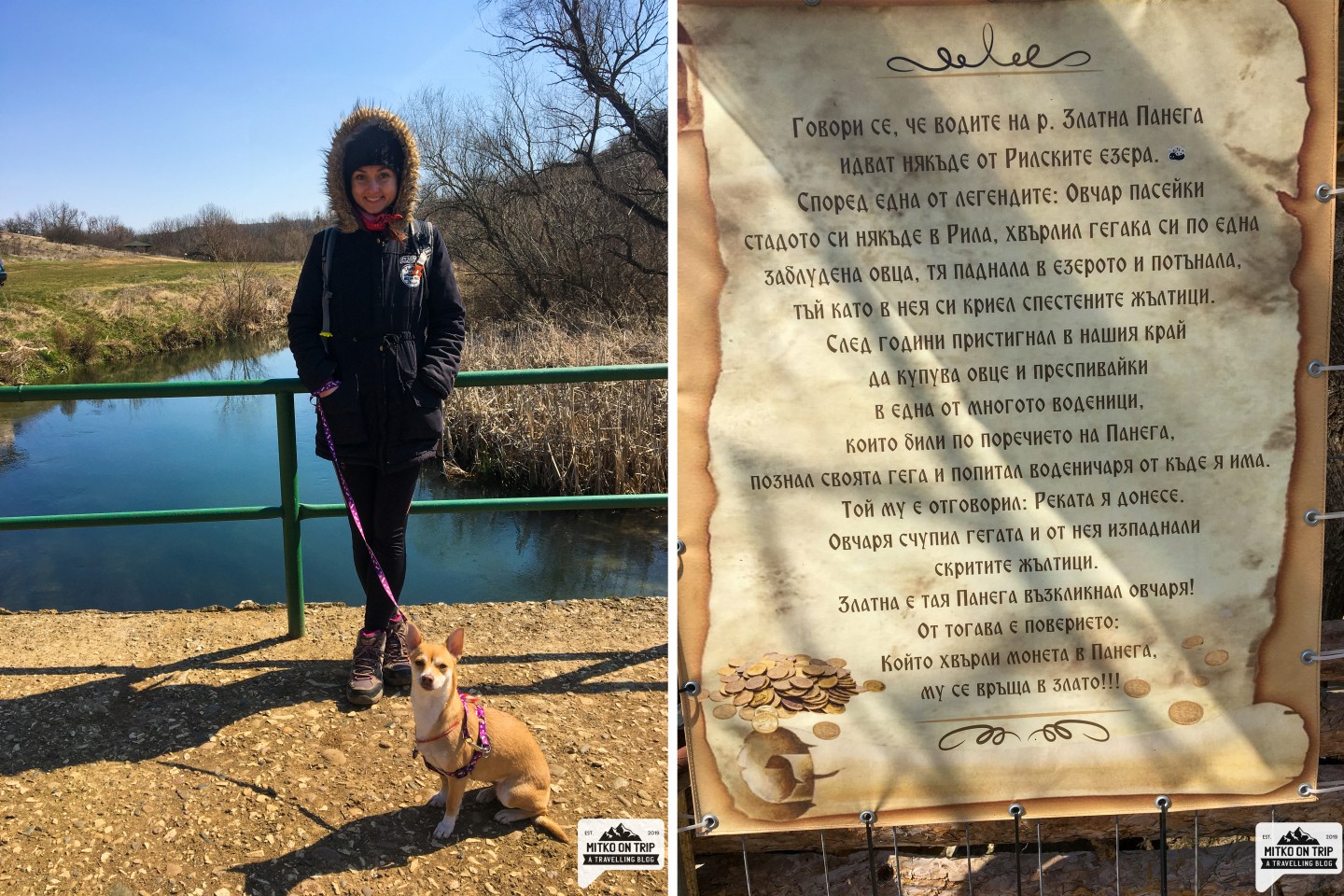 Not long after we reached the famous bridges built on the rocks above the river. Narrow paths are difficult to cross, but create a great "decor" for photos. There were several people on the way and because we didn't want to wait, we decided to take pictures on the way back. Don't do like us, because on the way back the light was quite unpleasant for photos and we were left disappointed. 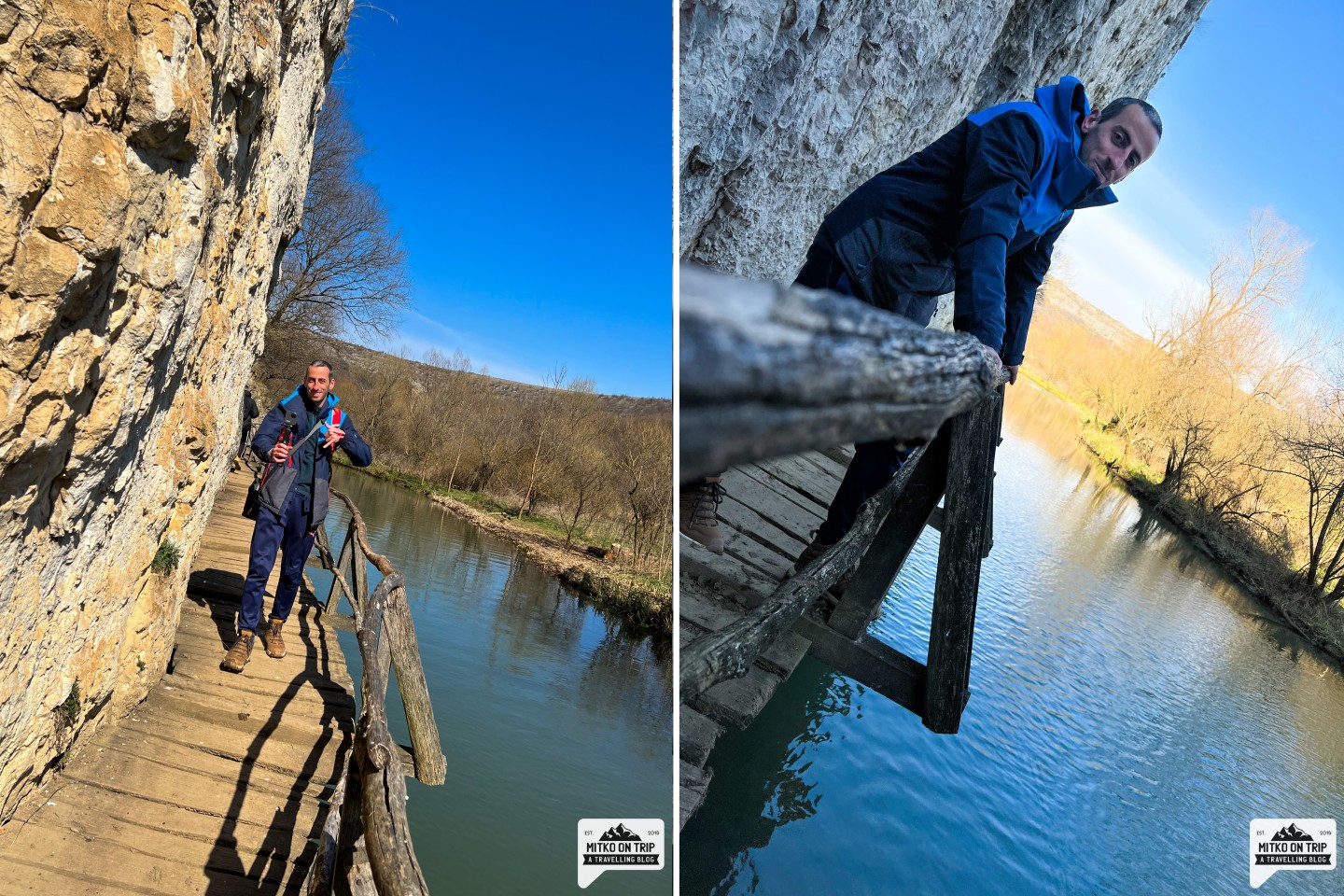 Shortly after the beautiful bridges we reached the cave "Temnata dupka". Of course, we couldn't go past it so we went in to see what was inside. Curiously, shortly after entering the cave we felt it warm. Inside it is maybe 20 meters long, but it is very dark (it is called Dark Hole after all ..) and you need to wear a headband or using the flashlight on the phone to walk carefully. Eventually we reached a dead end and headed back. 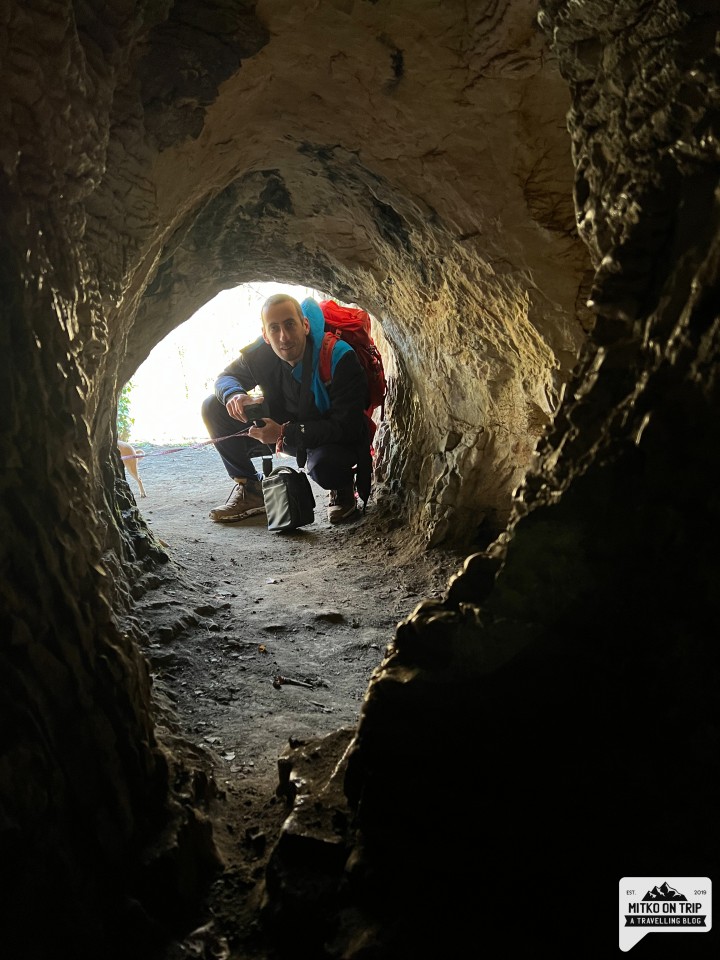 At the end of the eco-trail there is something like a shop with vending machines and a lot of benches where you can stop to eat and relax.

Here we met two friends in the river and stopped talking to them. I quickly interviewed them with the GoPro camera. I treated them to bread. They were pretty cool actually. 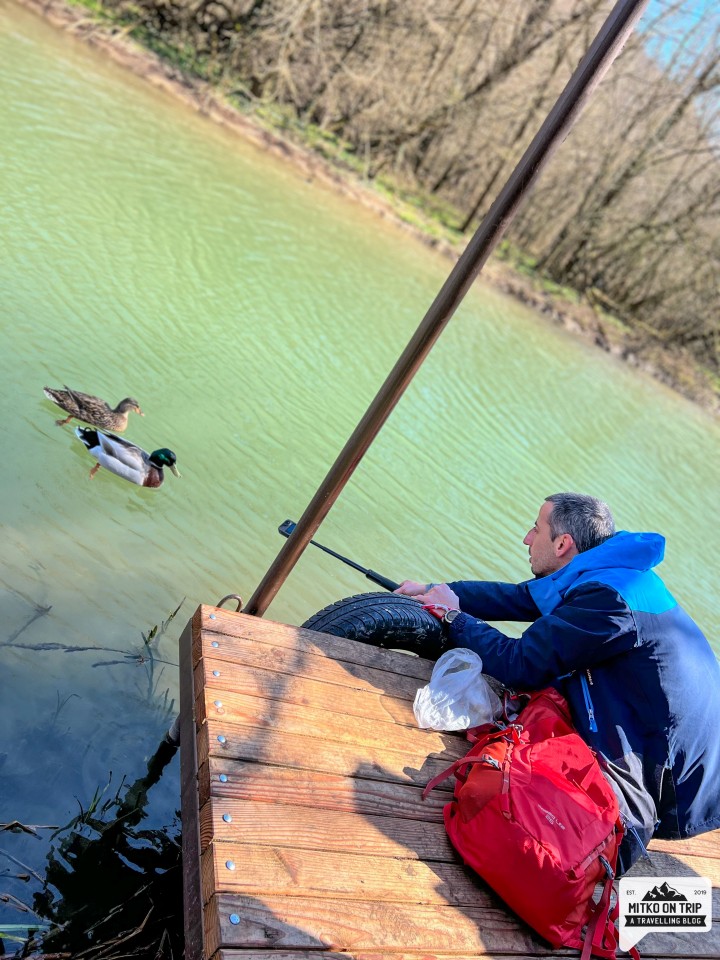 The main part of the eco-trail ends here. A sign indicating that there is a shooting range after it somehow stops you from passing. We however continued out of curiosity, but the path deviates from the river and climbs up. According to a sign, after 11 km he reached the Prohodna cave, but we did not want to check if that was the case. At least not this time. 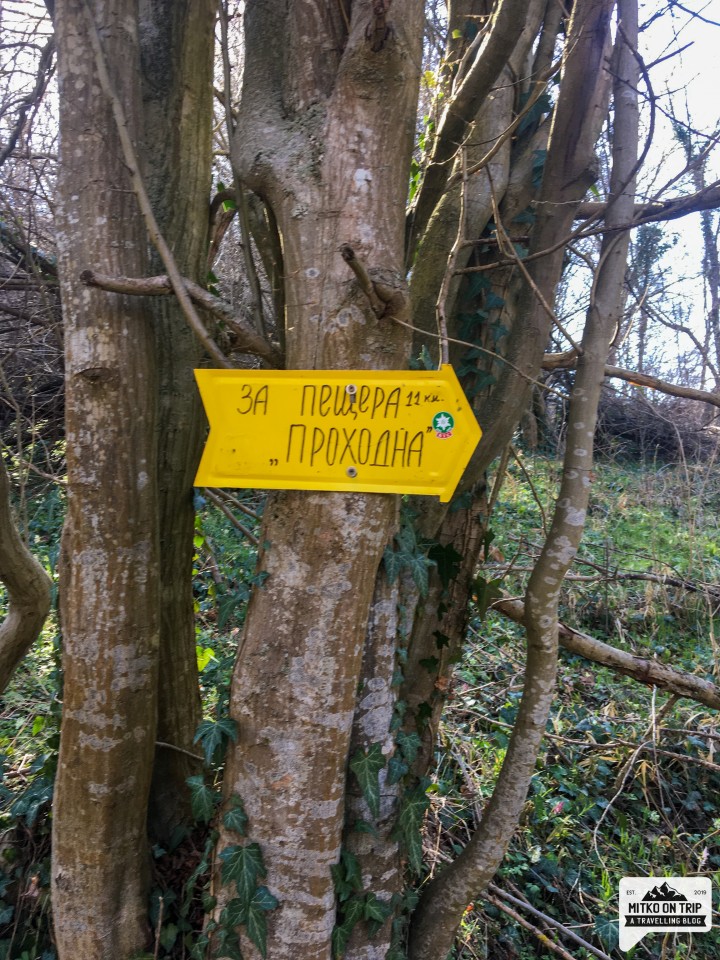 A short break on the benches and we return the same way back to the car. We cross the bridge and see a sign with congratulations. 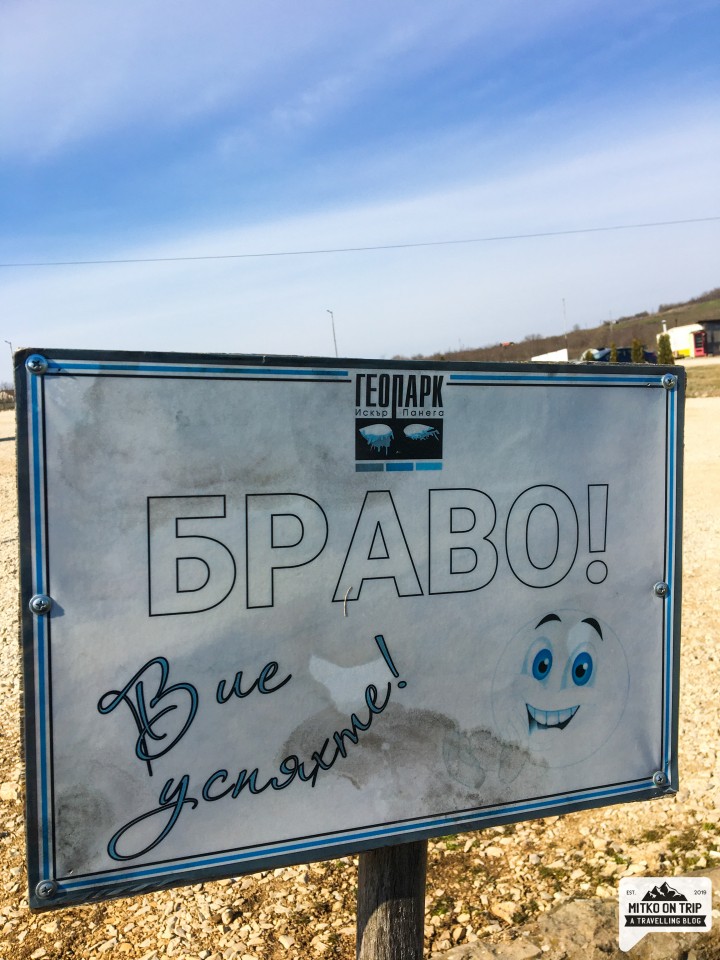 There were plenty of sink signs in the parking lot to wash your hands and shoes, but they and the restrooms were closed that day.

On the way back to Sofia we stopped to eat at the restaurant "Dobrevski" in the village of Zlatna Panega. Since we were with a dog, we sat at a table outside and ate deliciously before heading home full of positive emotions.