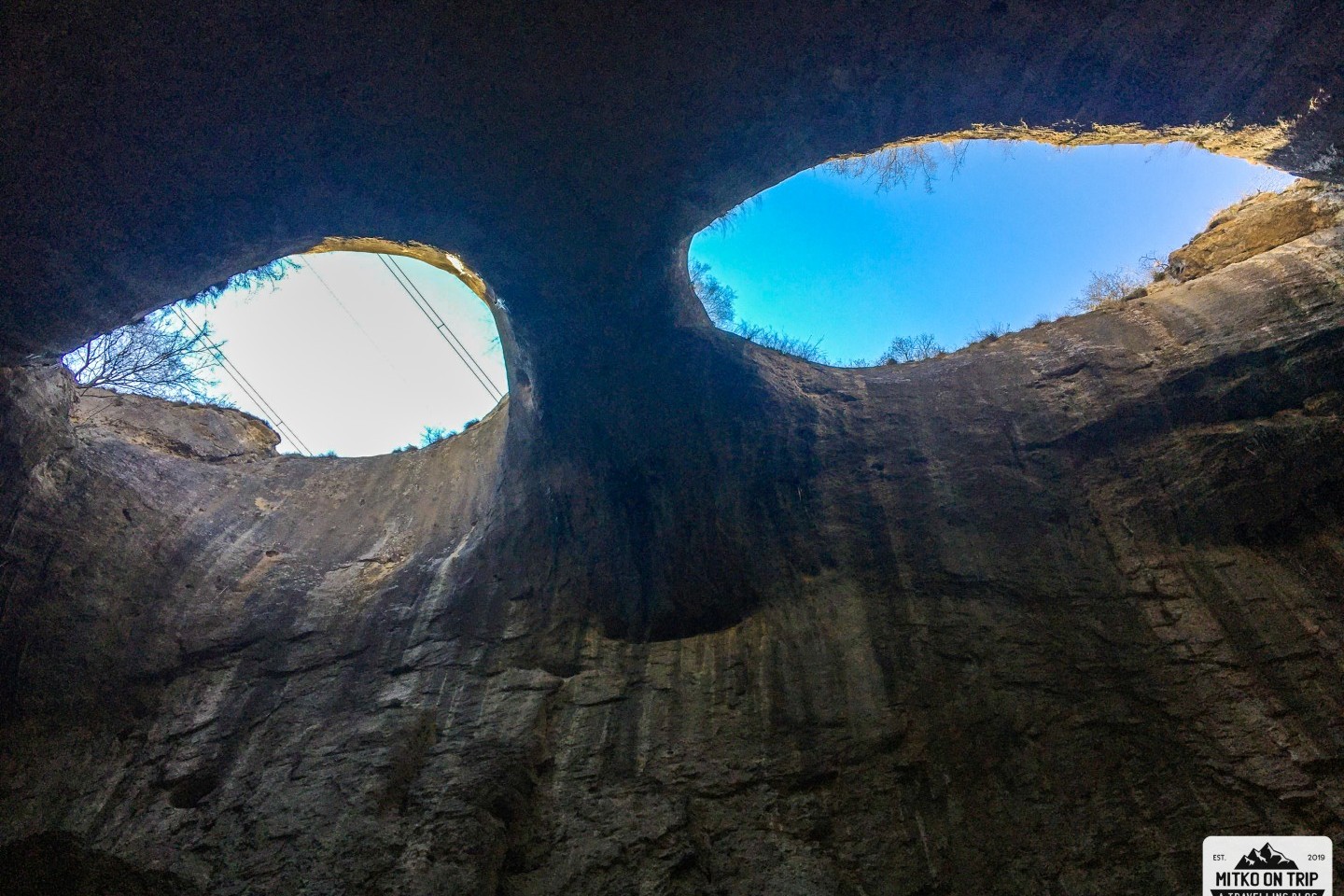 Prohodna Cave is located in the area of ​​the village of Karlukovo. It has been a natural landmark since 1962, and its fame comes for a variety of reasons. It is 365 meters long and reaches a height of 56 meters. In the ceiling of the cave were two huge openings resembling human eyes. For this reason, many people call it the "Eyes of God" or the "God's eyes". A large number of commercials, music videos and film productions have been shot here, such as "Time Apart", "The Way Back", "Shmenti Kapeli" and others. Another interesting fact is that this is one of the few caves in the world where bungee jumping is performed. In it you can also find dozens of climbing routes and enthusiasts can often be seen on the rock walls. Climbing routes are one of the most difficult in all of Bulgaria and require very serious physical training. 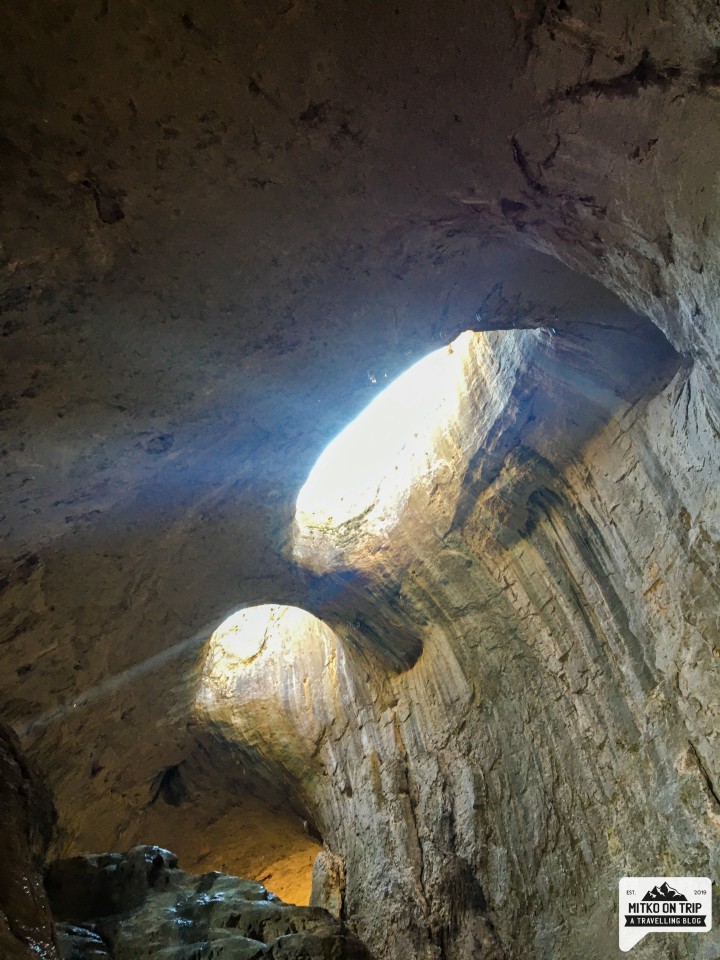 How to get to the cave?

The cave is located 0.5 km from the village of Karlukovo, Lovech region. It is 112 km away from Sofia and most of the time you travel on the Hemus highway. You have two options for stopping on both sides of the cave. One is on the meadow in front of the cave entrance, and the other is in front of the National Cave House. 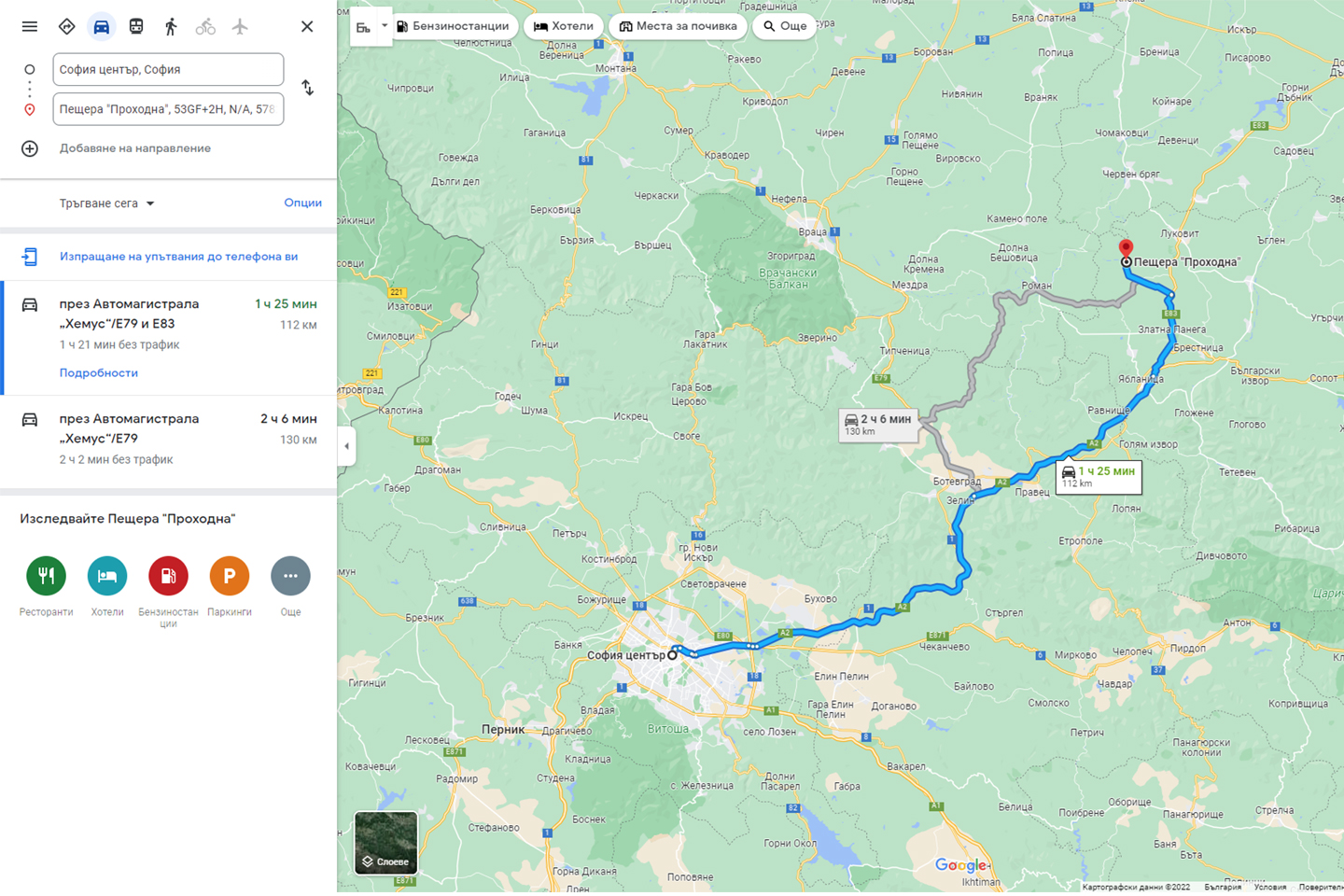 I recommend you leave your car on the lawn in front of the cave. You pass through the cave and at the end of it you take the path to the right to the National Cave House. It passes through the forest and has a small climb. On the way back from the Cave House you can go back on the road and see the stone house on the main road. This way you will be able to see everything interesting around the cave.

If you decide to visit only the cave, half an hour will be enough. For the whole path from the Cave House to Prohodna and back you will need at least an hour and a half (depending on physical training).

The path through the cave is not steep and not scary. Put on shoes with a nice gripper, because there is no path with a flat surface, but you walk on the stones. (might be slippery) 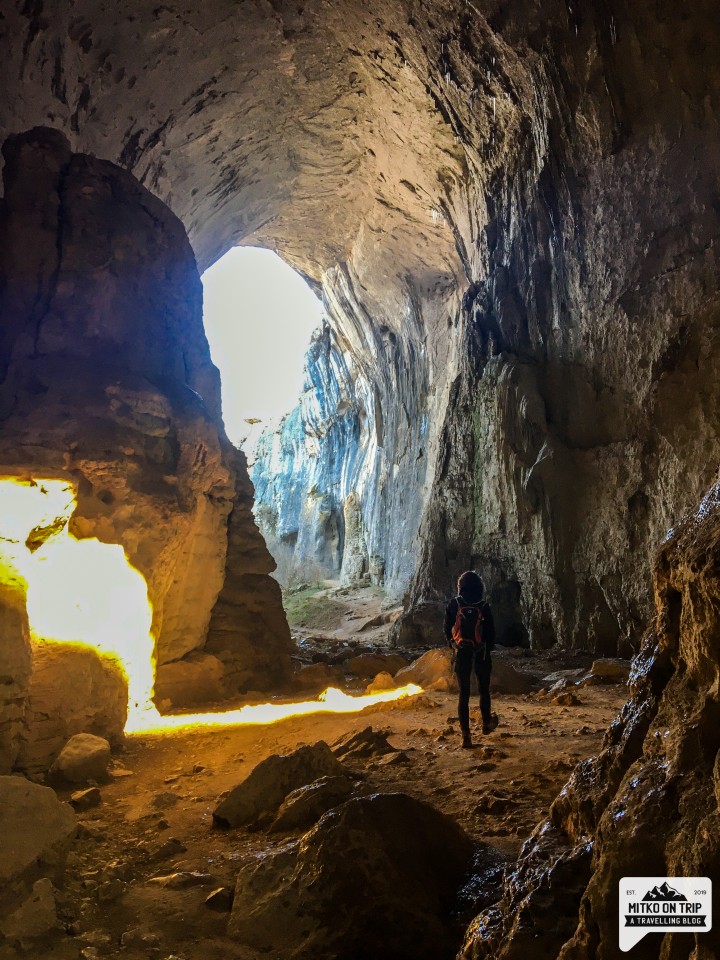 Can i take my dog

No problem. The cave is quite spacious and has room for your pet. Our dog Jerry really liked the cave. 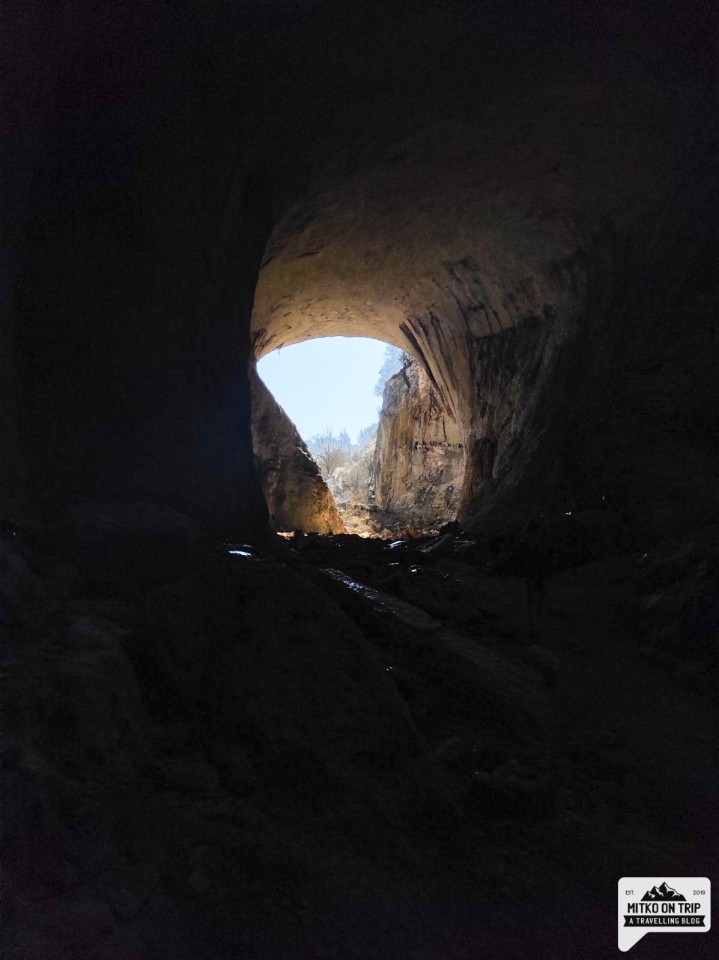 Can you tell me more about the history of the cave?

Of course! Prohodna Cave is actually the longest cave tunnel in Bulgaria with a length of 365 meters. The two openings in the ceiling, which resemble "God's eyes", according to people, were actually formed as a result of erosion and seeping water from the ceiling. This phenomenon is called "Chimneys". According to archaeologists, the cave was an important occult site for locals. On March 21, the vernal equinox, the sun's rays enter the cave from a certain angle, and fertility rituals were performed on that day. Earlier, the Iskar River passed and filled the cave. Over time, the river level has dropped and is now below the level of the cave. 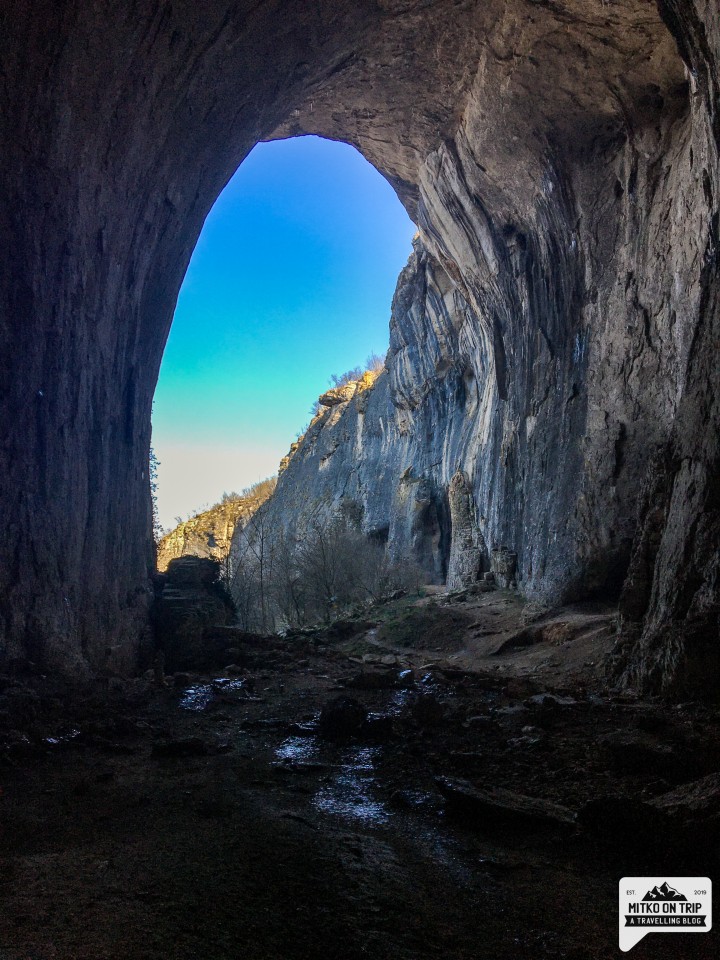 A friend from Varna (Simo) was visiting Sofia. He suggested that we visit the Iskar-Panega eco-trail, as well as the God's Eyes cave. Since I had not traveled to this area, I checked the map and it turned out that the two places are quite close to each other and we decided to combine them in one day.

The plan was to visit the eco-trail first, but it so happened that we took the wrong road and found ourselves just above the cave. Well, it was obviously meant to start with her. We parked the car on the lawn nearby. It was early in the morning and the souvenir sellers were just starting to come and set their tables. 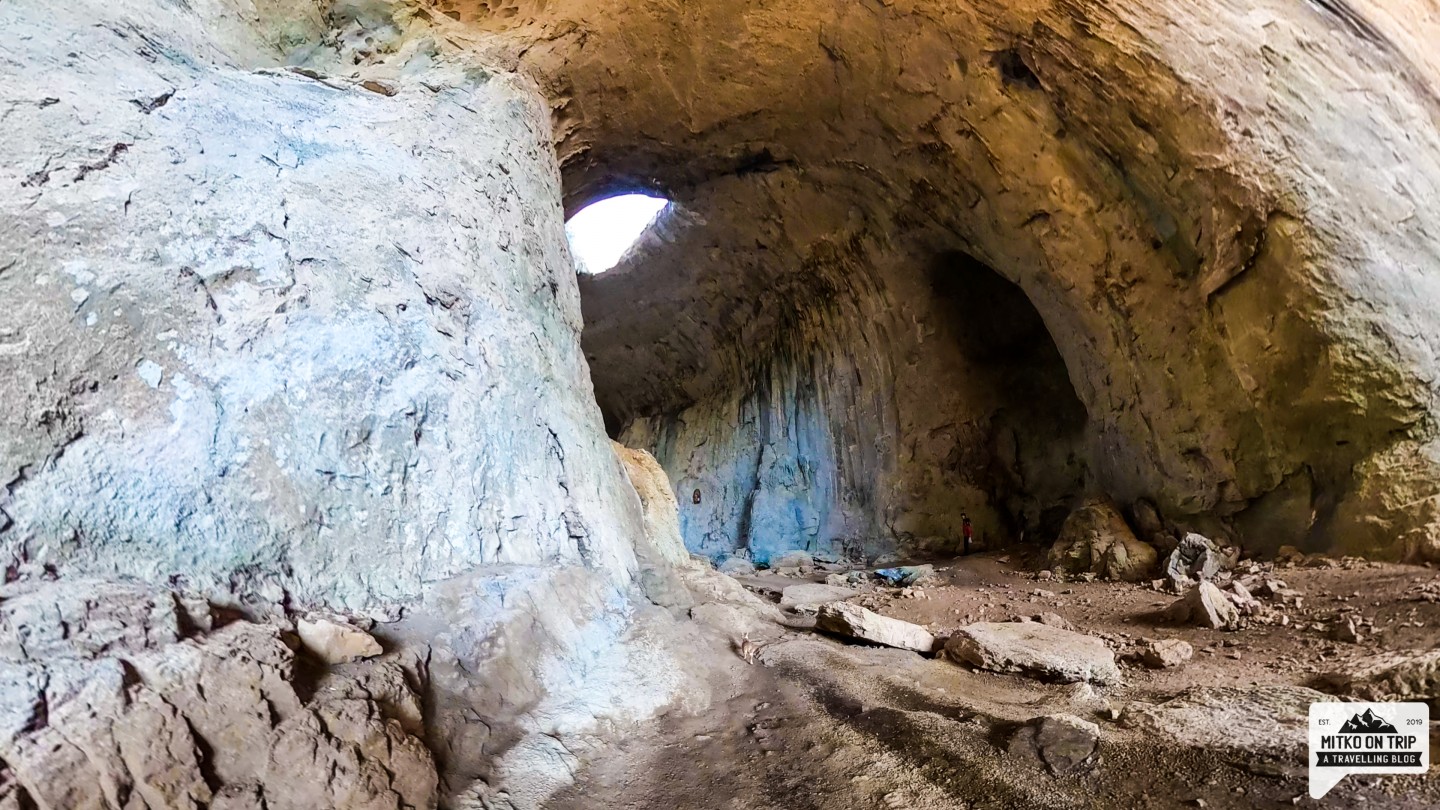 We entered the cave and in the first moments we felt how good the acoustics are. But the first impression seemed to be on how spacious and tall it was. I had never set foot in such a large cave before. The temperatures outside were around zero and it was quite cold inside. The sun's rays shyly shone through the two openings in the ceiling, but they couldn't keep us warm.

We enjoyed the beautiful view and continued through the cave. We imperceptibly reached the other exit and wondered what to do. We saw a path on the left and decided to follow it. Not long after we reached a steep (half-destroyed) staircase leading to a small cave. We decided to go up and see. It had interesting openings and looked like a place where people lived.

Then we continued forward and the path took us steeply down, where we crossed the river and climbed (again steeply) opposite. We continued on the path through the forest and soon reached the National Cave House. It offers great views of the Iskar River and the nearby railway line. 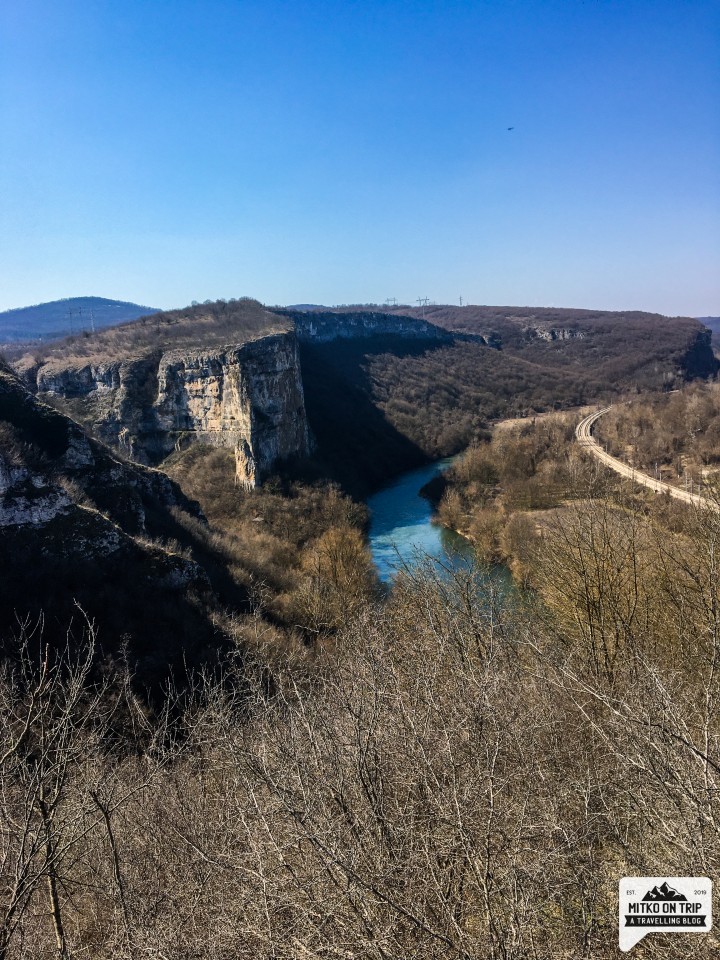 From there we returned along the asphalt road to the meadow in front of the cave. On the way we passed the small stone house by the road and looked at what is interesting inside. It turned out that there is a book with the most interesting things you can see in the area. Definitely check it out - there are good ideas. 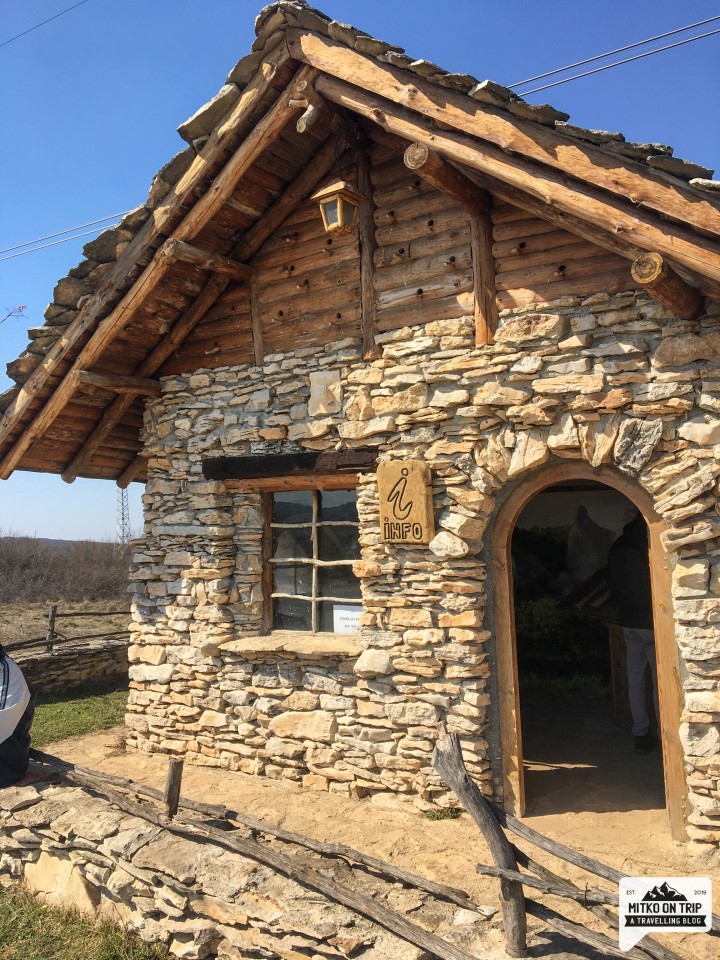