Mazalat hut is located on the eastern border of the Central Balkan National Park. It is located at 1620 m above sea level, in the area of ​​Mandrishteto. The hut is part of the route Kom-Emine (E3) - the most popular tourist route in Bulgaria. It was built in 1935. and has since been constantly evolving to offer the best conditions. Last year (2021) D-Iotov painted the second floor with amazing adventurous landscapes. The hut has several other buildings and can accommodate a little over 50 people. There is electricity, water and an internal bathroom / toilet, also the kitchen is wonderful. The dining room offers a view of the Triglav massif, and the beautiful white kitty creates a feeling of freedom and tranquility. 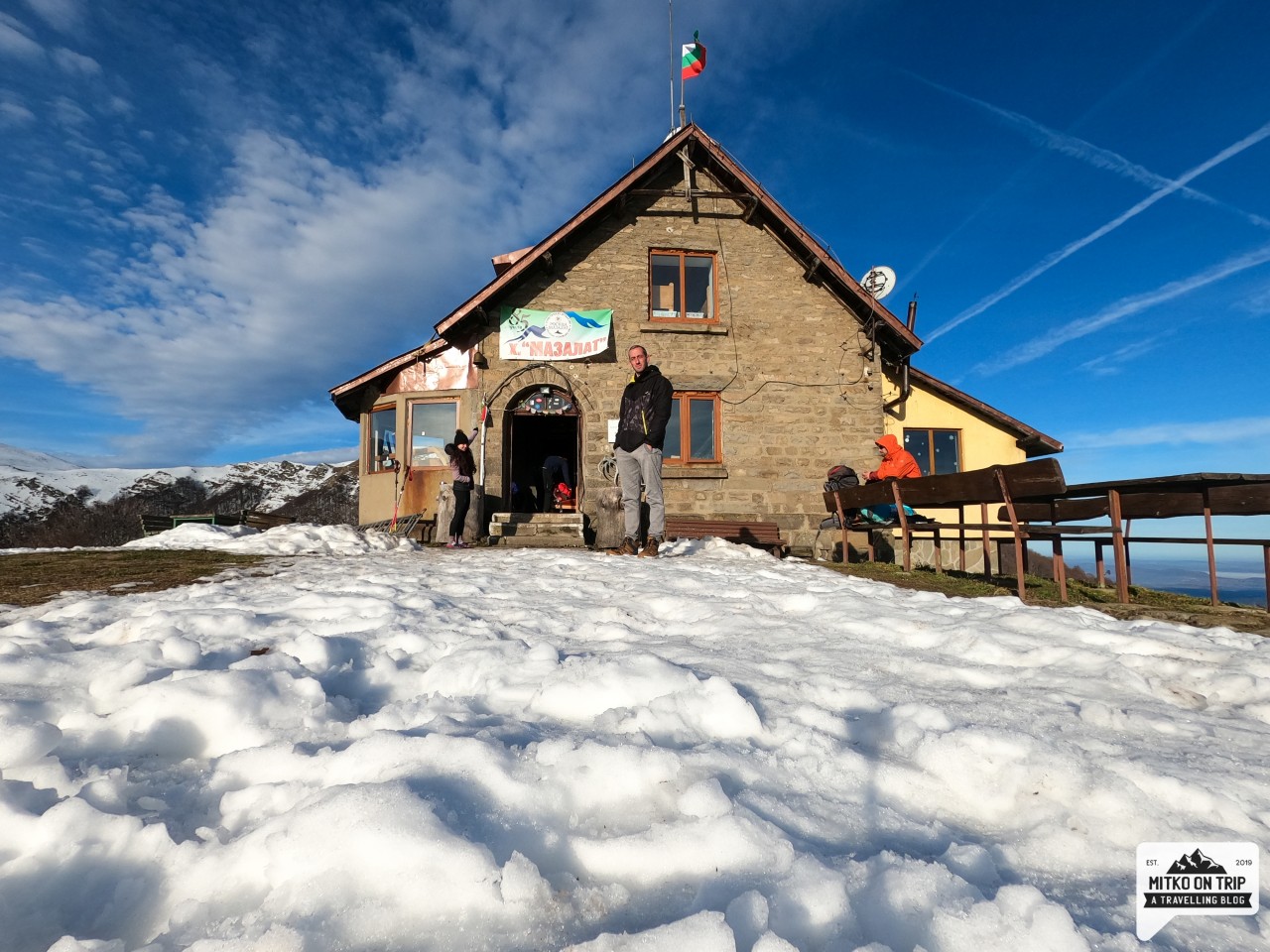 How do you get there? How long does it take?

There are many routes that lead to the hut.

Is the route difficult?

The route we have chosen is easy for people with a good motor skills. It is 9 km long and has about 450 meters of ascent. When we walked in the snow with breaks for eating and playing, we managed to get there in 2 hours and 45 minutes. In my opinion, during the warm months it will be extremely pleasant even for small children. 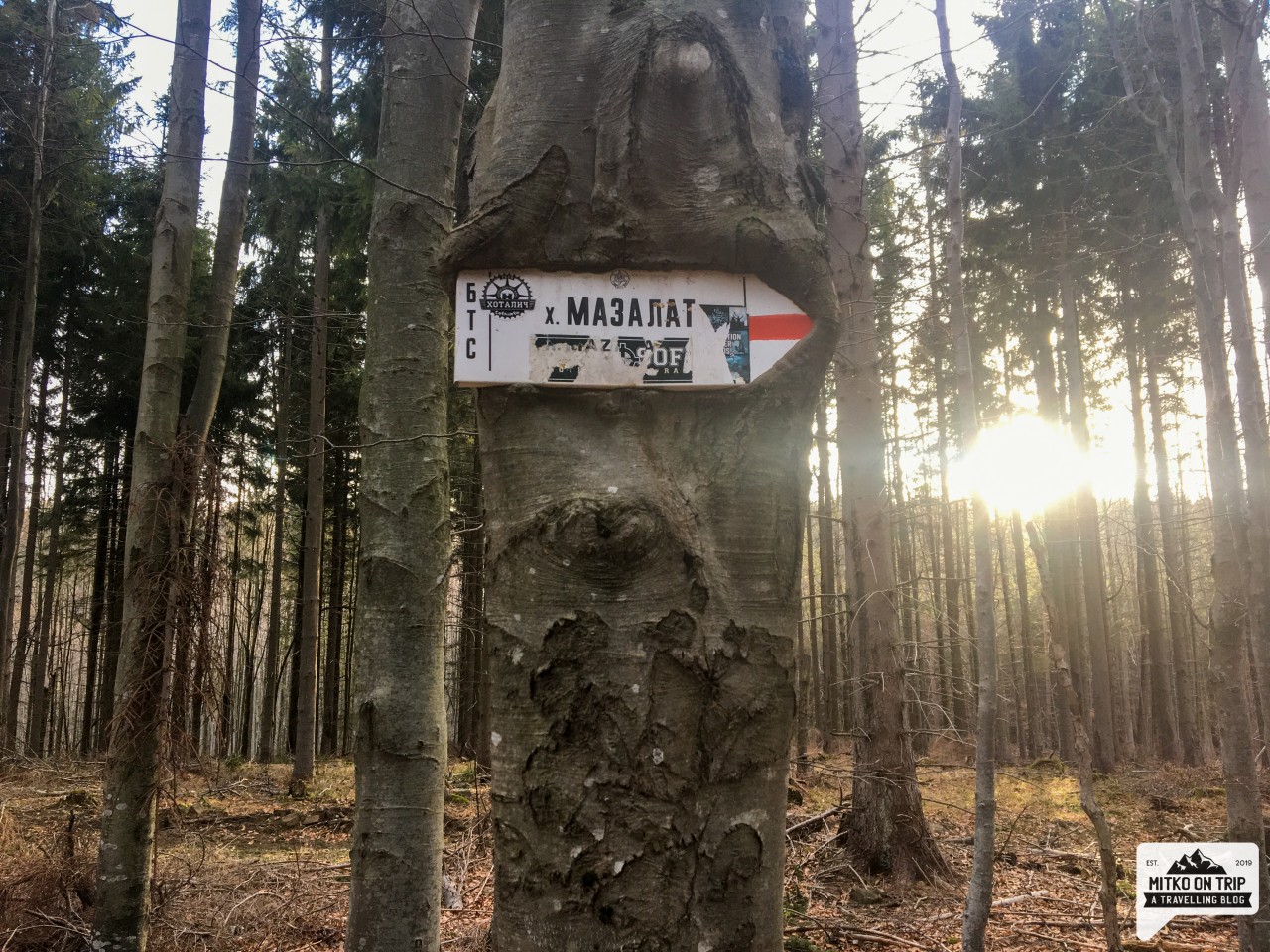 What can I visit nearby?

This time it all happened suddenly, somehow .... adventurous. The new year 2022 had just begun, we had fallen asleep, and suddenly Vili said, "Let's go to Mazalat?" I wondered a little about when it could happen, looked at the calendar to see which days were non-working and said, "Come on!" It turned out that we were not working until the 4th and we immediately wrote them to reserve 2 places to spend the night on January 2 in Mazalat. The interesting thing here is that a few days earlier my friends Pepo and Zhenya from Rove'n'Roam had written to me that they would go to sleep at Mazalat hut on the second of January. They had just returned from Belgium for a short time and we had no idea how we would be able to see each other. We have been fans of this hut for a long time, but the idea of ​​being able to combine it and see amazing friends was more than great.

We packed our bags, loaded our favorite adventure car and set off. On the way we were more excited than usual and wondered if we would reach the Partizanska Pesen hut, where the route starts, before Pepo and Zhenya. We considered having a bet to make it more interesting, but it turned out we were thinking the same. We both thought we would get there before them. And it is normal as the road from Varna is longer than from Sofia. We were also worried about the situation on the route, because there was no snow in Sofia at all (somehow unnatural for January 2nd).

We arrived at the parking lot, looked around and found what we knew and were the first. We started preparing our backpacks for the hike. And we were just ready to go up when a car entered the parking lots. We stareed and saw exactly our friends arriving at full throttle. They show up at the window and start shouting with joy. They stop the car next to us and we start hugging, and they kind of say something like, "Well, what are you doing here?", "How did you show up like that?" and many more questions. We quickly tell how we decided to surprise them and see each other, and they also manage to surprise us. They brought a friend with them - Eli. (Eli and I have known each other since the years in Varna, when Pepo and I went climbing at SC "Chudnite skali")

We quickly packed our backpacks, ate the wonderful muffins that Marty had prepared for us (thank you very much), dressed appropriately and set off for the hike to Mazalat hut. Vili and I were heavily equipped with thermal leggings, thermal blouses, thick pants, blouses, jackets, and Pepo ... was in shorts and a t-shirt. At first we wondered, but we know how tough he is. His wife scolds him a little ... but that's normal. She is just taking care of him. 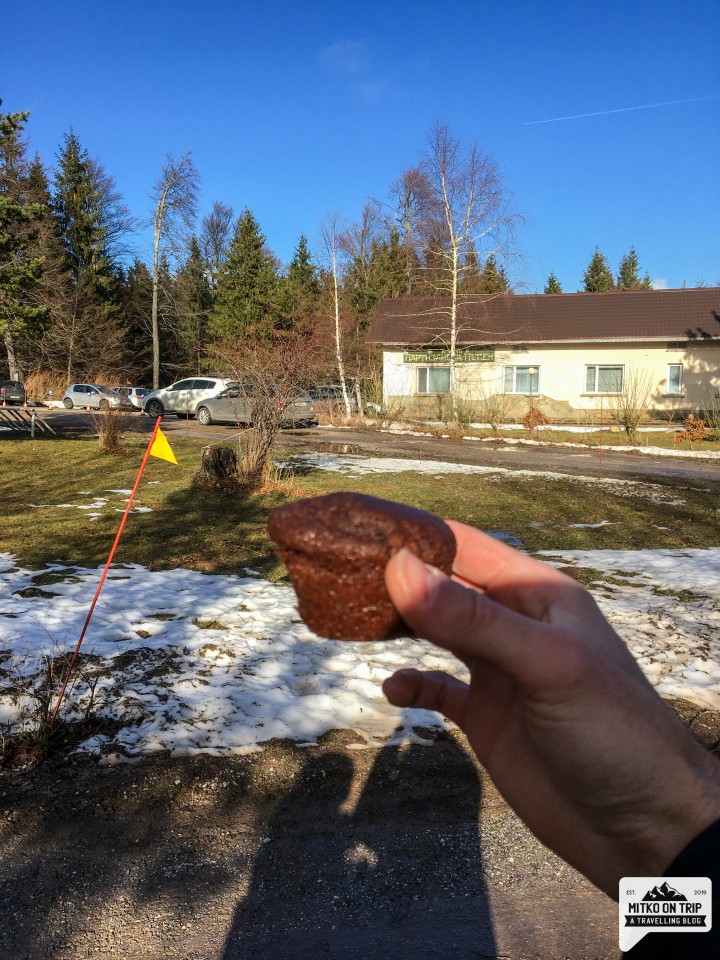 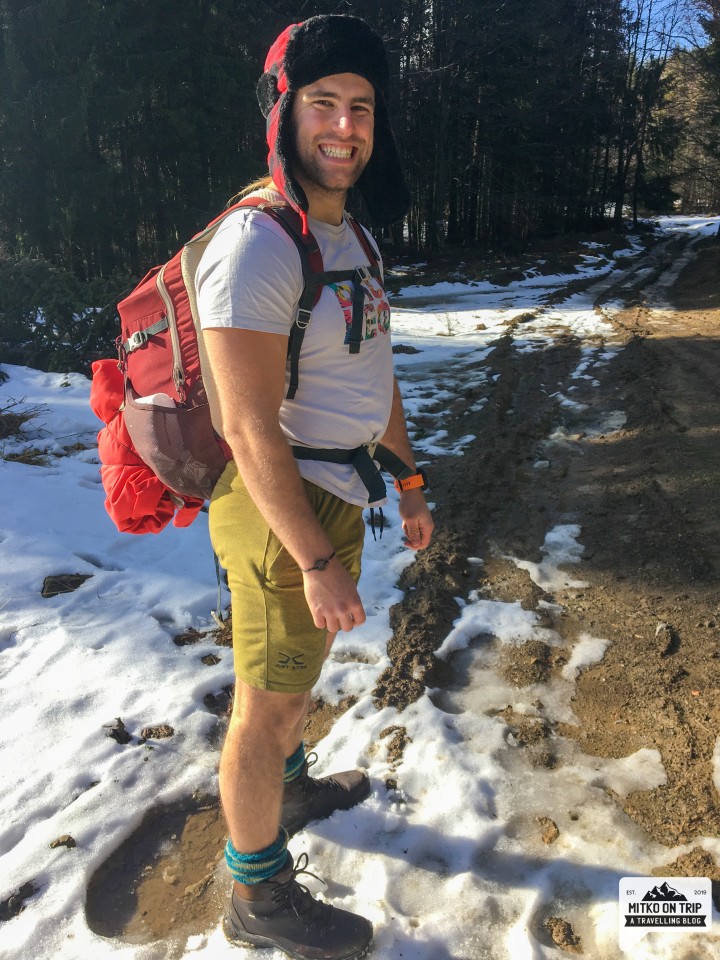 Shortly afterwards, we realized how much better Pepo was dressed than us. The sun shone, we walked up the path and began to warm up. As we walked we chatted about what we had missed for the others over the last year and it was very nice. Imperceptibly, the kilometers went one after another. On the way, winter slowly enveloped us. Autumn leaves and rain gave way to beautiful snowy peaks and happiness settled comfortably in our souls. We stopped several times to have snowball fights, toss in the snow, or just to take off another layer of clothing. And we got to our favorite place - "The Sign"! (On this sign on our first walk to Mazalat hut we decided to try to get back on the road and .... we got lost quite happily) 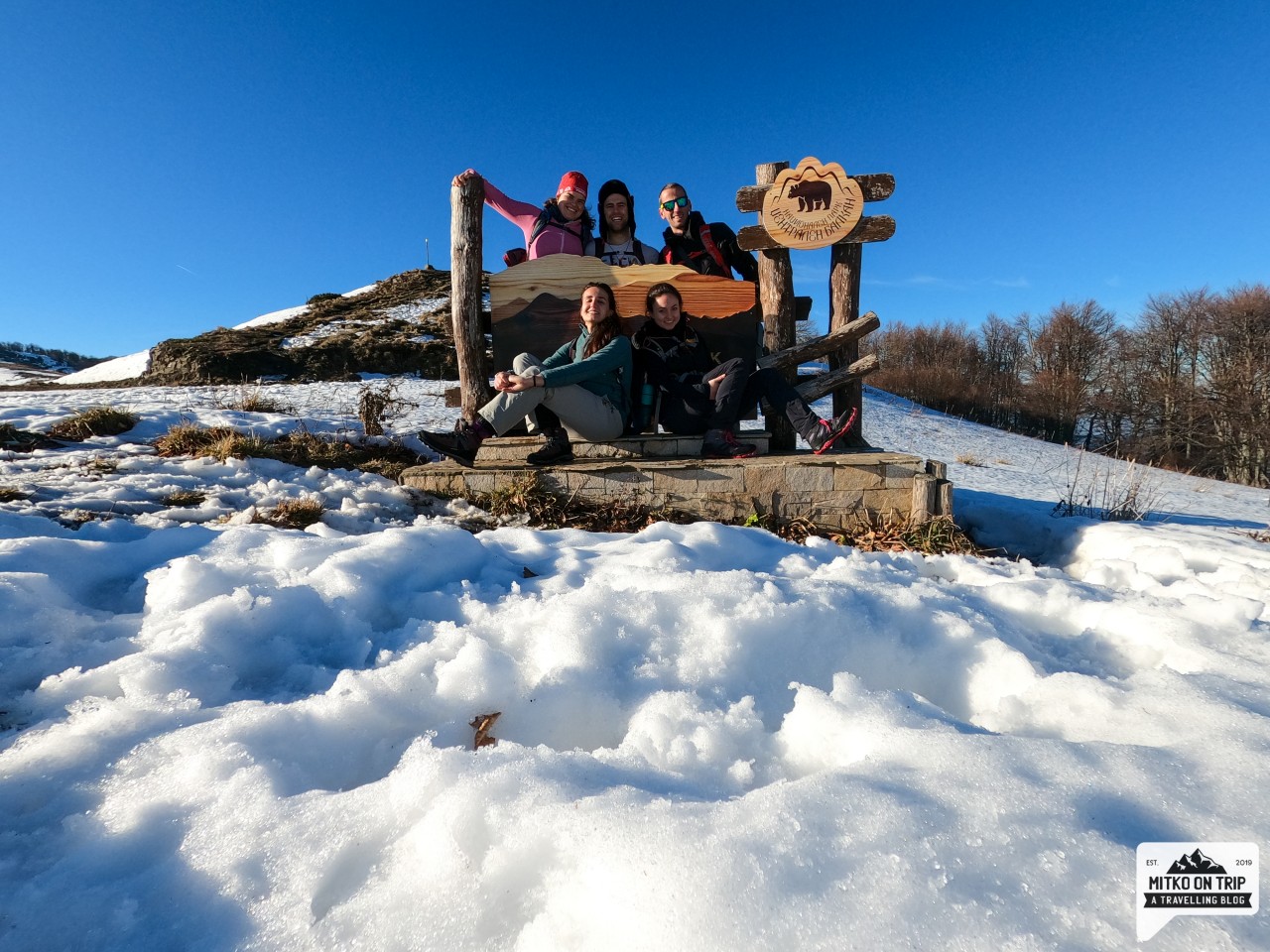 This is always a good time to take pictures, because we have traveled most of the way and we can relax. We could already feel how close the hut was, and the thought of the burning fireplace and the delicious bean soup swirled in our minds. We pass another hill and we already see the smoking chimney of the hut. We are not particularly hungry, but the thought of the amazing bean soup does not give us peace. We order one (each). The soup was so hot that smoke comes out of it and we can barely keep from tasting it right away. (Some try and understand that it is not a good idea) 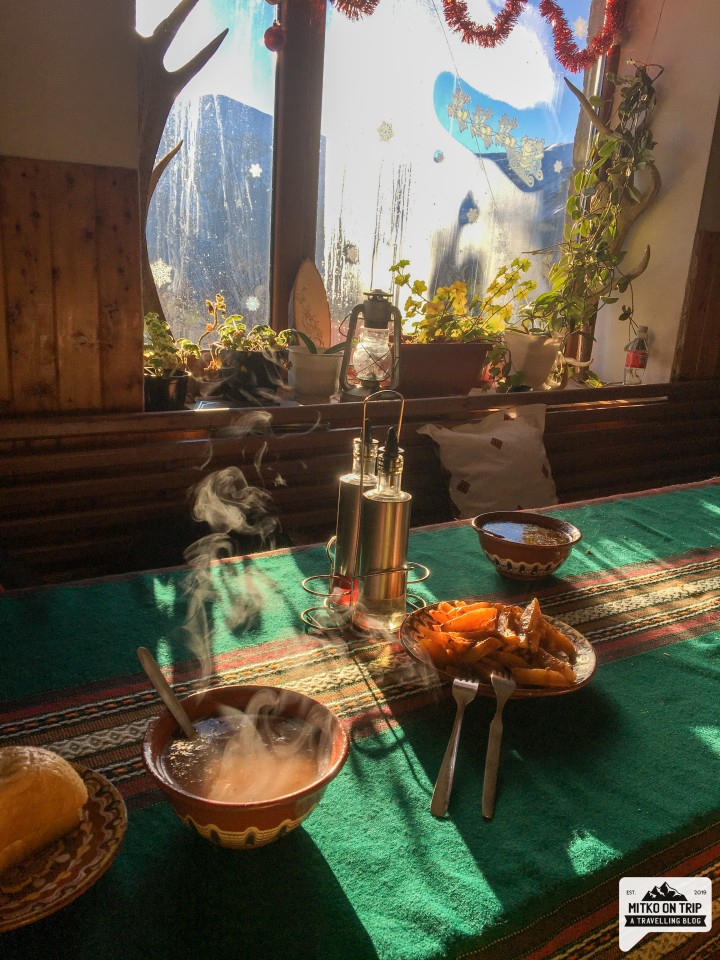 After a nice (tasty) welcome, we already notice how the sunset hides behind the Triglav massif, so fabulously decorating the window of the hut, as if it were an artfully painted picture. We wanted to go up to Valcha Glava Peak to send the sun, but in the end we decided that there was no time and we would take pics from here. Pepo and Zhenya and I prepared the drones and lifted them up with the idea of ​​catching the last rays of the sun. It is beautiful! We fail to make the dream shot, but the pleasure is on our faces. The sun has already set and it's time to sit by the fireplace to enjoy our pleasant company, play games, have fun. 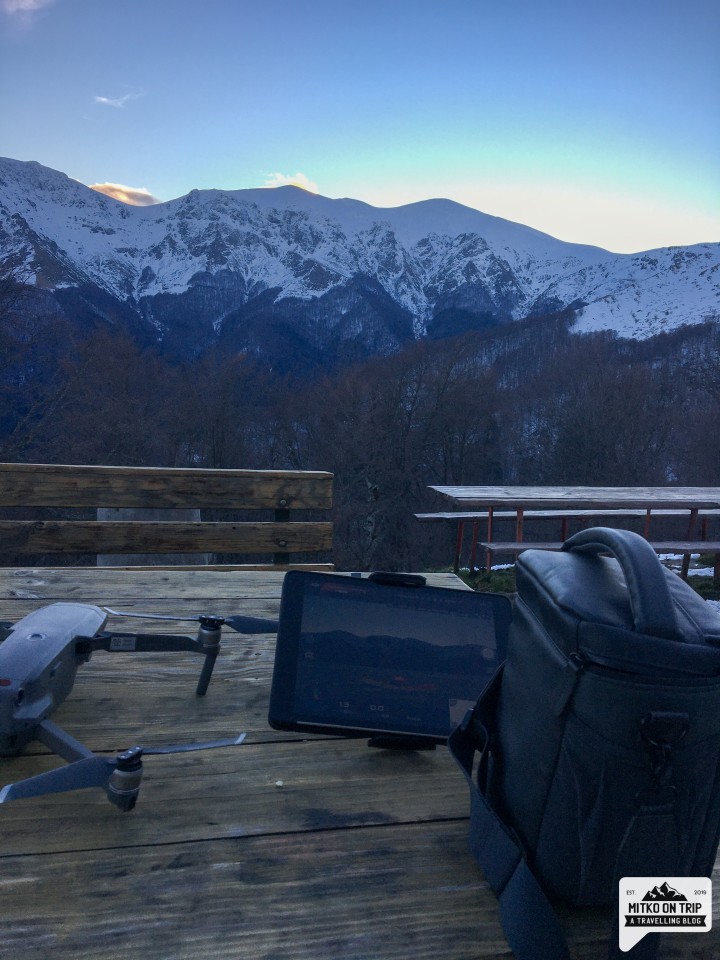 We had taken a few board games to play. The new game "Collect Bulgaria" of Bulgarian history turned out to be an excellent hit. Small and comfortable to wear, but extremely fun. Vili's favorite game Telestrations also managed to make us laugh and have fun. After the games we took out homemade sausage, cheese, wine, banitsa ... We raised a toast to the good friends and happy adventures! To us! As we ate happily, Zhenya apparently took a bite and looked weird at us. It turned out that the coin from the homemade banitsa we brought fell on her. Luck is luck, even if you don't expect it. And somewhere there an idea crept in.
- "Let's meet the sunrise on the nearby hill?" someone said confidently.
- "Come on! We're doing it!" - We all replied without a drop of doubt. 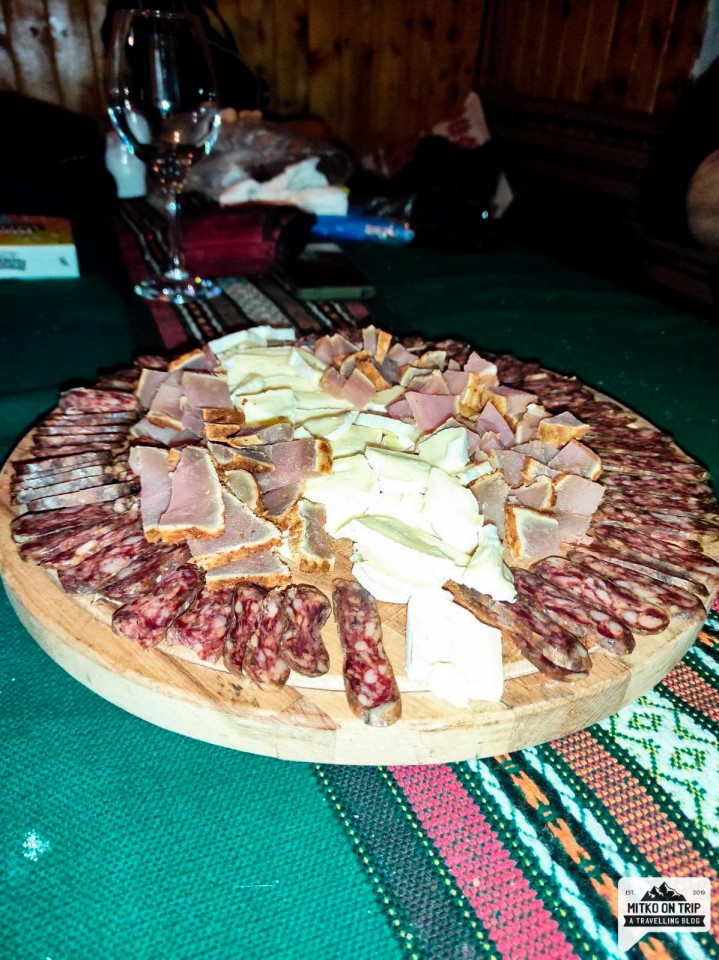 On our previous visits, I never got up to see the sunrise. Valya and Plamen teased me a lot, and now this moment has finally come. We went to bed and we all sounded the alarms together. No one would skate.

Suddenly an alarm rang, followed by another. One by one we started to get out of bed. It wasn't that early - around 6:40AM, but it's so sweet to sleep in a hut that you can't get easily up. We dressed properly, prepared the equipment and left the hut waiting for the sunrise. The plan changed in motion and we decided to wait for the sunrise on the hill next to the hut. We had thought that the sun would appear on this side. At one point, the sky turned fabulously pink. There was a very strong constant wind, but we were well dressed. I took the drone up in the air and started waiting for the first rays. 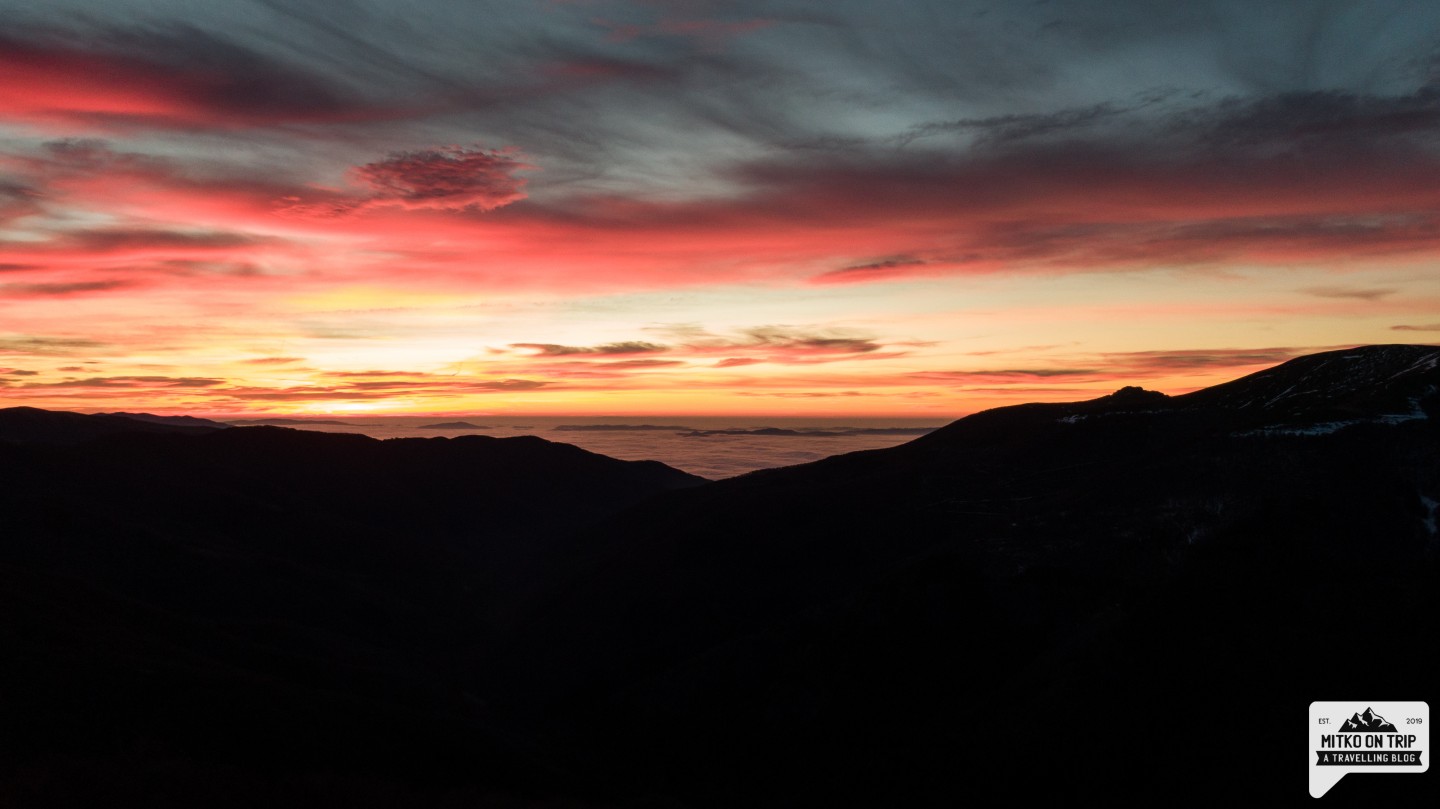 In the distance, the fog had covered the ground and looked like sea. Just behind it, the light began to show, until at one point the whole sky "lit up." The view was ... wow! The fog above the ground, the sun with fiery colors, the pink clouds above it, the wind-generators on the hill ... You watch and admire what is happening. We stayed to watch the sun rise for maybe an hour, while the last ones with frozen fingers retreated to the warmth of the hut. And there were some great fried slices of bread with jam and cheese waiting for us. Hmmm ... 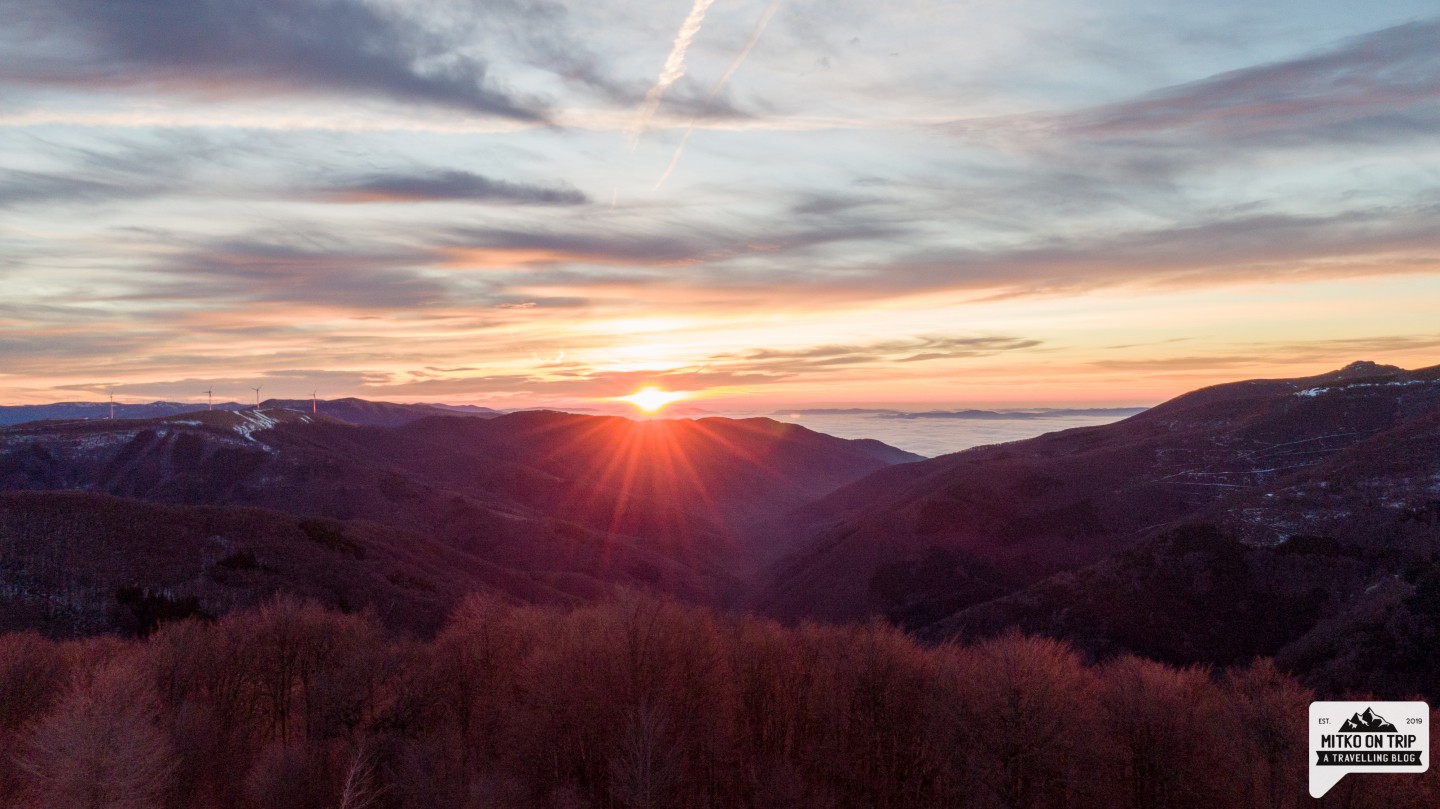 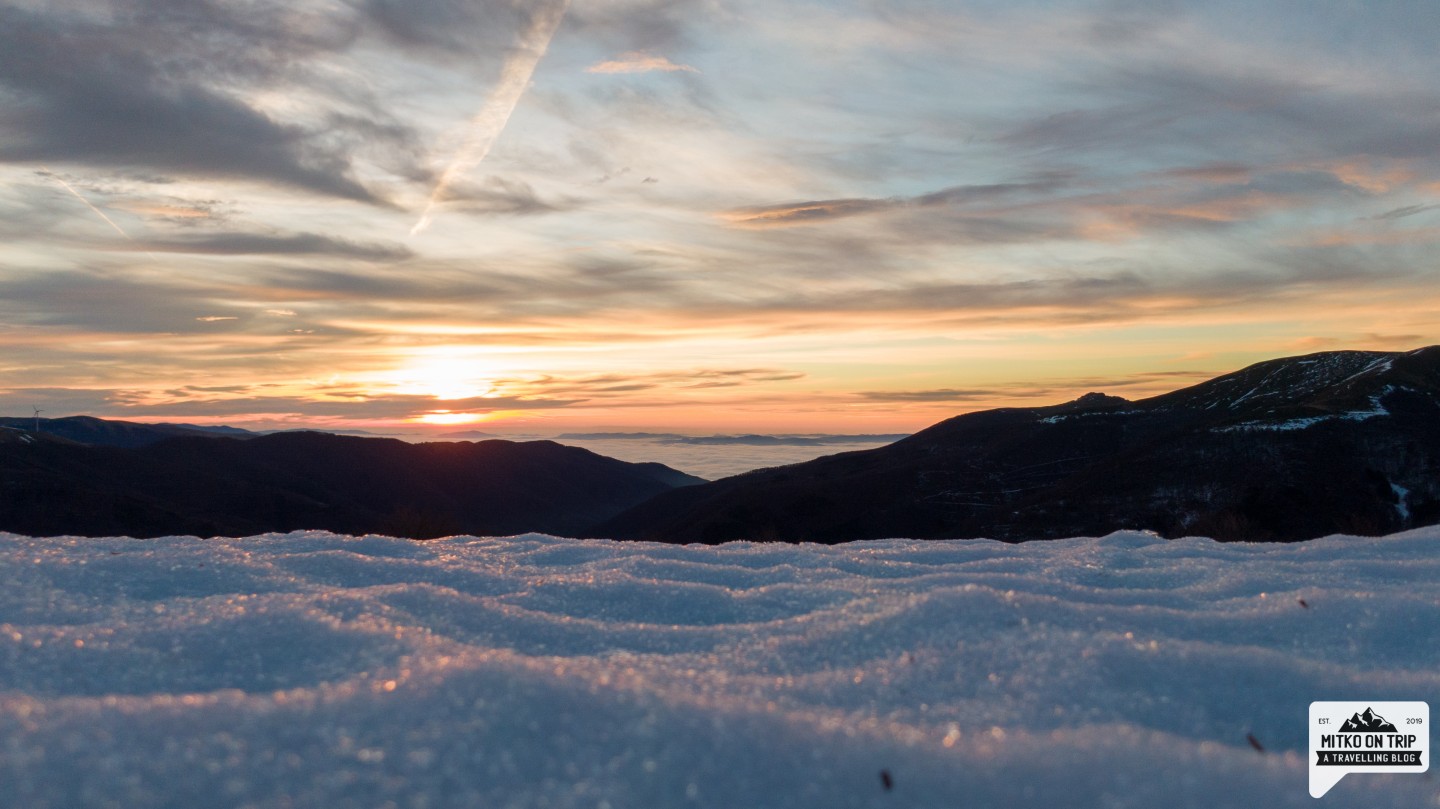 Our friends packed their bags and headed down the path. We stayed a little longer to lie down and take a break from city life. It's nice to be up there in the mountains, in the nature, away from all the noise. But, now it's time to go down to Partizanska pesen hut. We say "see you soon" on the hut and I stick my first "Mitko on Trip" sticker on the door. We promise to come back at least one more time this year and set off. Slowly the kilometers go with a smile. We enjoy another wonderful sunny day in the mountains with its beautiful views. We think about Pepo, Zhenya and Eli - whether they have already arrived, what they are doing. They are probably wondering the same thing about us. And here that somehow imperceptibly we are already at the end of the path and we start to see the parked cars through Partizanska pesen hut. 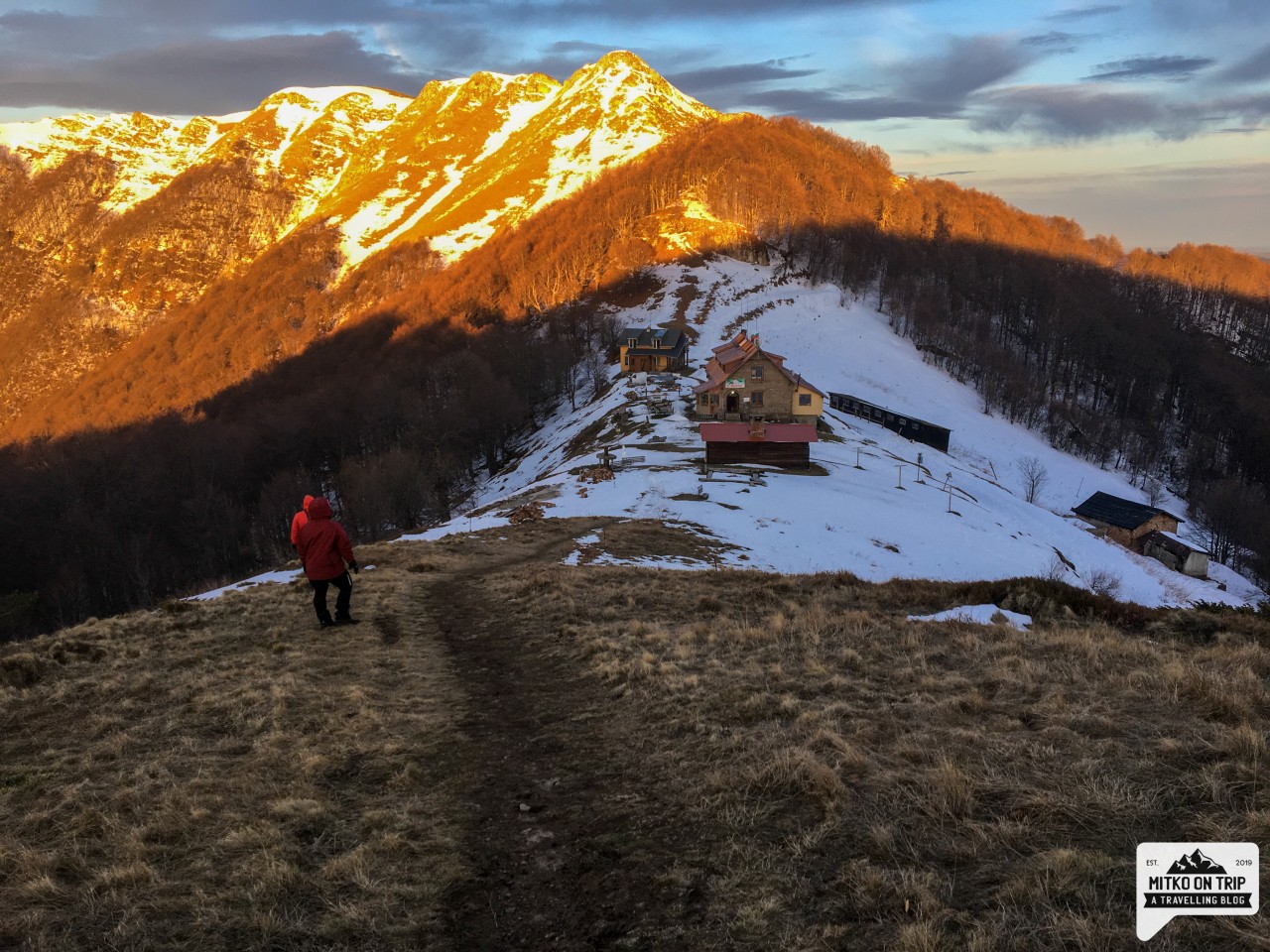 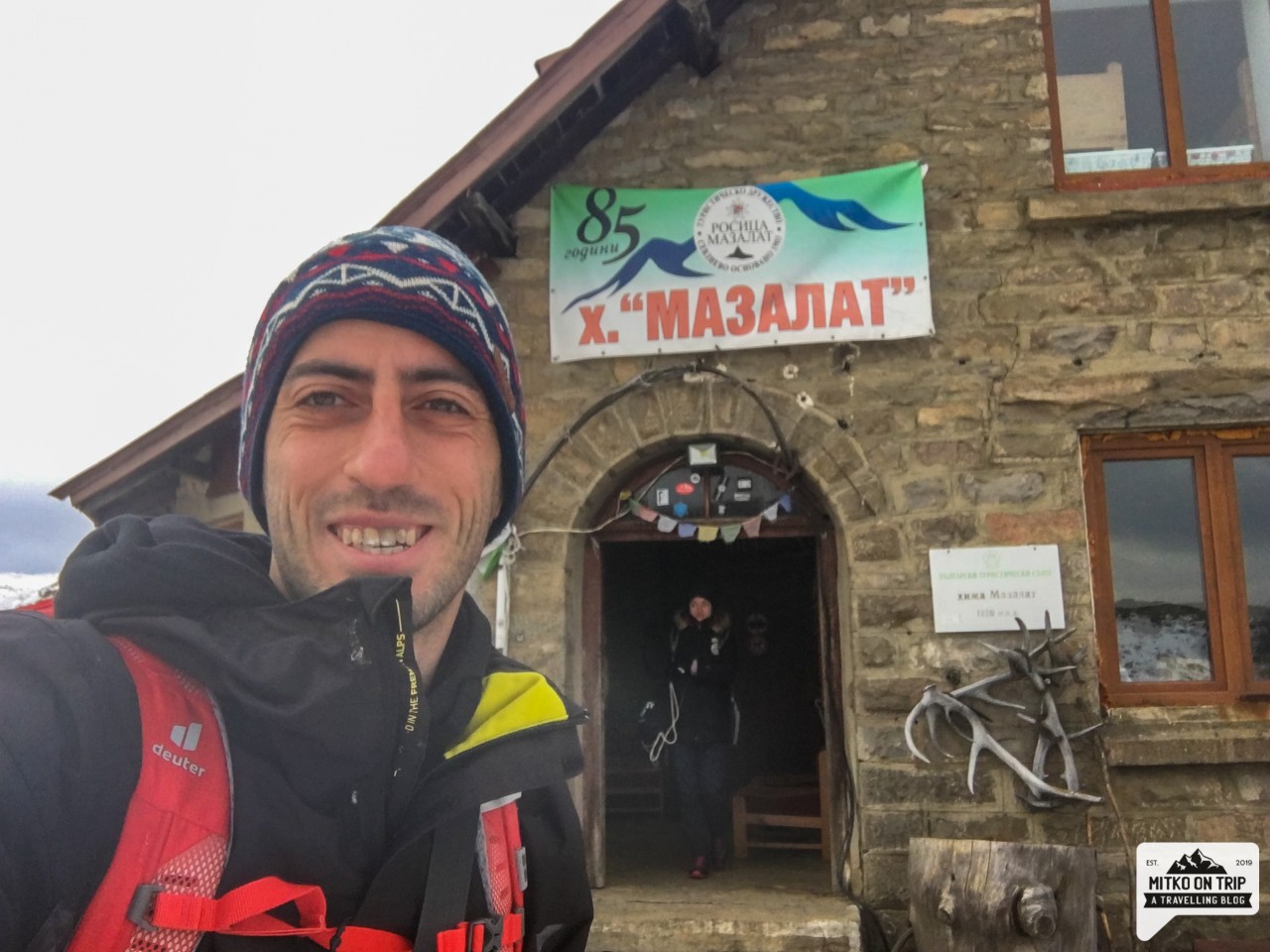 We get in our favorite adventure car and head back to Sofia. On the way we send another day with an amazing sunset and we are already planning the next adventures. 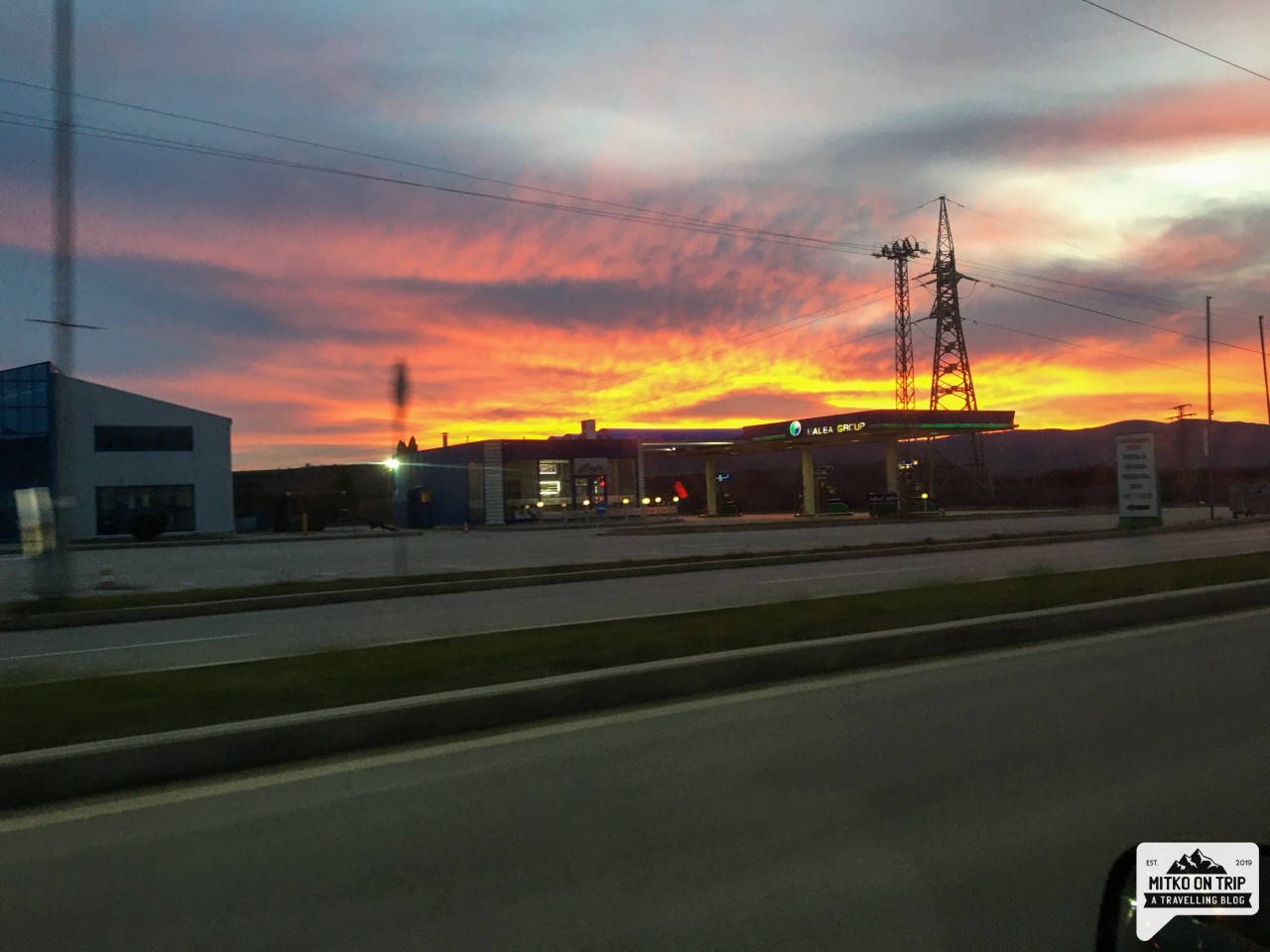